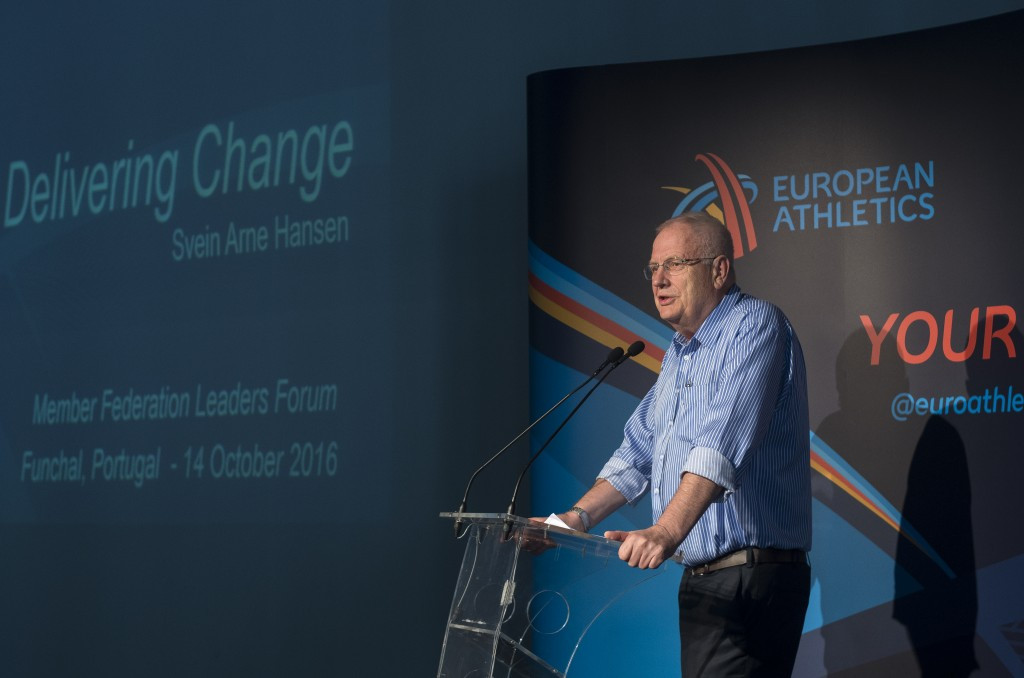 European Athletics President Svein Arne Hansen spoke here today of the importance of the governing body sending "one clear message" when it comes to voting  on the proposals of the International Association of Athletics Federations (IAAF) governance structure reform process.

IAAF President Sebastian Coe and the Working Group on Governance Structure Reform embarked on a global roadshow earlier this week, which will see it meet with Member Federations from each of athletics' six continental bodies to talk through the "Time For Change" document.

Following stops in the Dominican Republic’s capital Santo Domingo on Monday (October 10) and Chile’s capital Santiago on Wednesday (October 12), a roadshow is due to take place here tomorrow as part of the European Athletics Convention.

Like those that have gone before, it will be focused on ensuring that there is a comprehensive understanding of the reform proposals ahead of a Special Congress on December 3 in Monaco.

"I want to emphasise once more how important this is for athletics and our future," Hansen said in his speech, entitled "Delivering Change", to mark the start of the Member Federations Leaders Forum here.

"You need to pay attention tomorrow and to ask questions if you need to.

"In my view the changes proposed are right for our sport, but you must be convinced.

"It is important that when it comes time to vote at the Congress in Monaco, we, Europe, send one, clear message."

Major changes to the governance of world athletics were approved at a meeting of the IAAF Council during the Olympic Games in Rio de Janeiro, with Coe claiming they will make a "massive difference" to the sport.

An explanation of them is also set to be provided at roadshows in Gold Coast on October 21, Doha on October 27 and 28 and Johannesburg on November 2.

A leading member of the Working Group on Governance Structure Reform was Alex McLin, who joined Hansen on a panel session here today.

Asked about how the IAAF perceives its own sport at this moment in time, the Court of Arbitration for Sport member said he believes "there is a realism about the scope of the challenges".

"I think that there is also a determination as to just how far the mechanisms need to go and need to be put in place in order to secure the organisation and the sport going forward," added McLin.

"I came across an organisation that is absolutely determined to do the best that it can to transform and evaluate the structures and mechanisms in place and to do so in an open fashion.

"Not only by means of consultation with its members, but also in terms of finding out what are the best practices out there, how are they applicable to athletics or not, and therefore adopting the right approach."

Completing the panel was journalist Hajo Seppelt, the first to lift the lid on alleged systemic doping in Russia.

Documentaries produced by Seppelt prompted a World Anti-Doping Agency investigation, which led to Russian track and field athletes being banned from international competition, including Rio 2016, by the IAAF.

"They [the IAAF] have been very courageous and this is now for me the benchmark for everyone worldwide to say, 'This is what happens if I am doing that kind of crime'," said the German.

As well as the opening session of the Member Federations Leaders Forum, the second day of the European Athletics Convention featured a calendar conference and networking session, and European Union funding opportunity workshop.

To catch-up with all today's ongoings at the Convention visit our Live Blog here.

The three-day event is due to conclude tomorrow with the second and third sessions of the Member Federations Leaders Forum and the European Athletics Golden Tracks awards ceremony, where the continent's best male and female athletes of the year will be crowned.