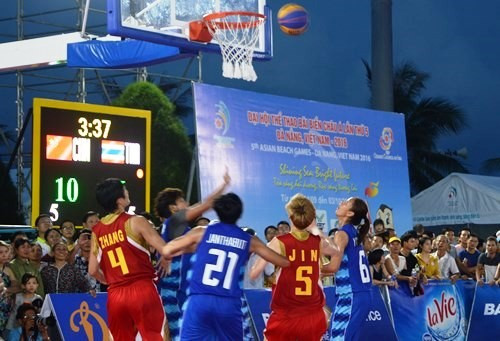 Speaking following a busy session of finals here at the Asian Beach Games, FIBA 3x3 development associate Nicolas Widmer is still hopeful the sport could be added to the programme to join its five-a-side cousin.

A final decision on adding new events and disciplines within existing sports is due to be taken by the International Olympic Committee (IOC) in June 2017.

He also believes it is a discipline which appeals more to young people as it is easier to watch and play, and invariably ends in a close finish.

"Rugby sevens and beach volleyball are the benchmarks for us," he told insidethegames here.

"We have watched and are trying to learn from what they have done with professional circuits.

"We are also pleased with how many new countries are emerging and challenging for medals."

The Netherlands won a surprise bronze at this year's FIBA Europe 3x3 Championships in Bucharest while Hungary claimed an equally unexpected victory in the women's tournament.

Widmer also believes that, like rugby sevens and rugby union, basketball 3x3 requires a different sort of athlete from the five-a-side game.

The faster pace lends itself to a more explosive style, he claims, while the court surface, one-basket format and more liberal contact rules allow for different tactics and training methods.

Greece's men only reached the quarter-finals of the European Games, for instance, despite entering a team packed with top national team players.

"We are currently carrying out physical tests, including GPS monitoring, to assess what these differences are [between the two formats]," the official said.

"We will then hope to develop more specific training regimes."

Since being first pioneered at the 2009 Asian Youth Games and then the following year's inaugural Summer Youth Olympic Games, both in Singapore, the discipline has gone from strength to strength in multi-event competitions.

It also appeared at the Baku 2015 European Games and should feature at the 2018 Asian Games in Jakarta and Palambang, Indonesia.

Talks are also underway to appear in future editions of the Commonwealth and Pan American Games.

Olympic inclusion seems the ultimate end-goal of this progress.

But a report commissioned by the Tokyo Government has this week predicted that the Japanese Games may cost 3 trillion yen (£22 billion/$30 billion/€26 billion) unless drastic cost-cutting measures are introduced.

This marks a 400 per cent increase on initial budget estimations.

In this climate, organisers may be reluctant to add yet more disciplines to the programme.

Widmer insists that 3x3 would be cheap to install, however, and, like here at the Asian Beach Games, it could take place in a temporary venue in the city centre.

"Courts are easy and very cheap to install," he added.

"Each squad would only consist of four players, so it would not require a huge number of additional athletes and officials."

Organisers are already hoping to house skateboarding and sport climbing competitions at a special facility in central Tokyo after they were officially added onto the programme last month.

It is expected that street and park freestyle BMX competitions will also be approved next year in order to share a venue with skateboarding.

Potential basketball courts could also be housed close by, it is hoped.

These talks were due to be “accelerated” following Rio 2016 ahead of a final decision at next June's IOC Executive Board meeting.

Many other sports are hoping to add mixed events to sit alongside male and female ones.