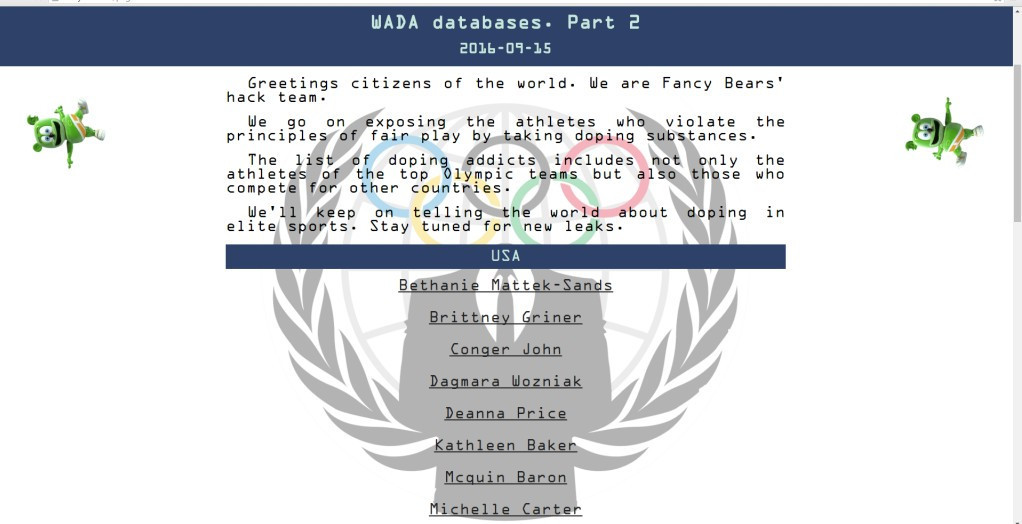 Russia have been asked to help fight against the hackers who have again infiltrated the website of the World Anti-Doping Agency (WADA) and published the confidential information of 25 athletes from eight countries, including British cyclists Sir Bradley Wiggins and Chris Froome.

The hacking group Fancy Bears' published the names and documentation of the athletes that it alleged had taken banned substances.

"We go on exposing the athletes who violate the principles of fair play by taking doping substances," the group said in a new entry, called WADA databases Part 2, on its website.

It went on to promise new leaks.

The documents released, however, appeared to be related to "therapeutic use exemptions" (TUE) obtained by the athletes from various sporting bodies.

WADA, which has previously revealed that the confidential information was stolen during a hack of its database, confirmed today that there had been another batch of information leaked by Fancy Bear, involving 10 American athletes, five Germans, five Britons and one each from the Czech Republic, Denmark, Poland, Romania and Russia.

WADA has blamed a Russian group and has approached the country's Government to assist it in its investigation.

"WADA is very mindful that this criminal attack, which to date has recklessly exposed personal data of 29 athletes, will be very distressing for the athletes that have been targeted; and, cause apprehension for all athletes that were involved in the Rio 2016 Olympic Games,” said Olivier Niggli, the director general of WADA.

"To those athletes that have been impacted, we regret that criminals have attempted to smear your reputations in this way; and, assure you that we are receiving intelligence and advice from the highest level law enforcement and IT security agencies that we are putting into action,

"Given this intelligence and advice, WADA has no doubt that these ongoing attacks are being carried out in retaliation against the Agency, and the global anti-doping system, because of our independent Pound and McLaren investigations that exposed state-sponsored doping in Russia.

"We condemn this criminal activity and have asked the Russian Government to do everything in their power to make it stop.

"Continued cyber-attacks emanating from Russia seriously undermine the work that is being carried out to rebuild a compliant anti-doping programme in Russia."

The German athletes included Robert Harting, the Olympic discus gold medallist at London 2012 and a vocal critic of doping in athletics.

Harting claimed in a message on his Twitter account that the medications he had used had been cleared by WADA.

WADA said the information had been obtained by gaining access to the Anti-Doping Administration and Management System (Adams) database via a phishing attack using an International Olympic Committee created account for the Rio 2016 Games.

Russia's Sports Minister Vitaly Mutko claimed they were ready to help WADA but disputed the fact that any Russian group were behind it.

"How can one possibly prove that the hackers were from Russia?" he said.

"Nowadays, Russia is blamed for everything and it seems to be in the trend"

"I want to say that we have no such information and we are also deeply concerned since the hacked documents could have also contained information on Russian athletes and it could be made public as well.

"We have a law in Russia on the protection of personal databases.

"If someone breaks them, then he or she is brought to criminal responsibility.

"Data must be protected."

The latest batch of documents suggest that three-time Tour de France winner Froome had a TUE for prednisolone, which is used to treat a variety of inflammatory and autoimmune conditions, for five days in May 2013 at the Critérium du Dauphiné and seven days in April 2014 during the Tour of Romandie.

The latter TUE has been widely reported but the 2013 Dauphiné, which Froome won, has not been.

In both cases the TUE was approved by the Mario Zorzoli, the former scientific advisor and doctor at the International Cycling Union (UCI).

Sir Bradley, the five-time Olympic gold medallist and 2012 Tour de France champion, meanwhile, is claimed to have had a number of TUEs for salbutamol - a medication that opens up the medium and large airways in the lungs - dating back to June 2008, as well as the asthma medications formoterol and budesonide.

Triamcinolone acetonide, given because of Sir Bradley's lifelong allergy to pollen, was also approved by Zorzoli.

Zorzoli stepped down from his role at the UCI in July 2015.

The Italian doctor had been briefly removed from his duties as in March 2015 after accusations were made against him by former professional rider Michael Rasmussen.

The Dane had given evidence in a United States Anti-Doping Agency case against former Rabobank doctor Geert Leinders, and alleged that Leinders advised him to use the steroid didehydroepiandrosterone as a result of a recommendation from Zorzoli.

Zorzoli was later reinstated because it was found there was not enough evidence to support Rasmussen's claim but he left the UCI shortly afterwards.

UK Anti-Doping chief executive Nicole Sapstead revealed that they have contacted members of Team GB to warn them their personal data could be at risk.

"UKAD strongly condemns actions of this nature and we are appalled that five members of Team GB have had their private data published illegally online," said Sapstead.

"Not only does it undermine our work and the protection of clean sport, but it is grossly unfair to the athletes, whose personal data has been put at risk.

"We continue to treat this matter with the utmost concern and seriousness, and we are working hard with WADA to urgently determine what impact, if any, this may have on other British athletes, and exactly what information may have been compromised.

"Yesterday, as a precaution, we wrote to all members of Team GB to let them know that their information may be at risk.

"This morning we spoke to all those already affected, and are in the process of contacting others who we believe are most likely to be at risk, to provide them with additional support."