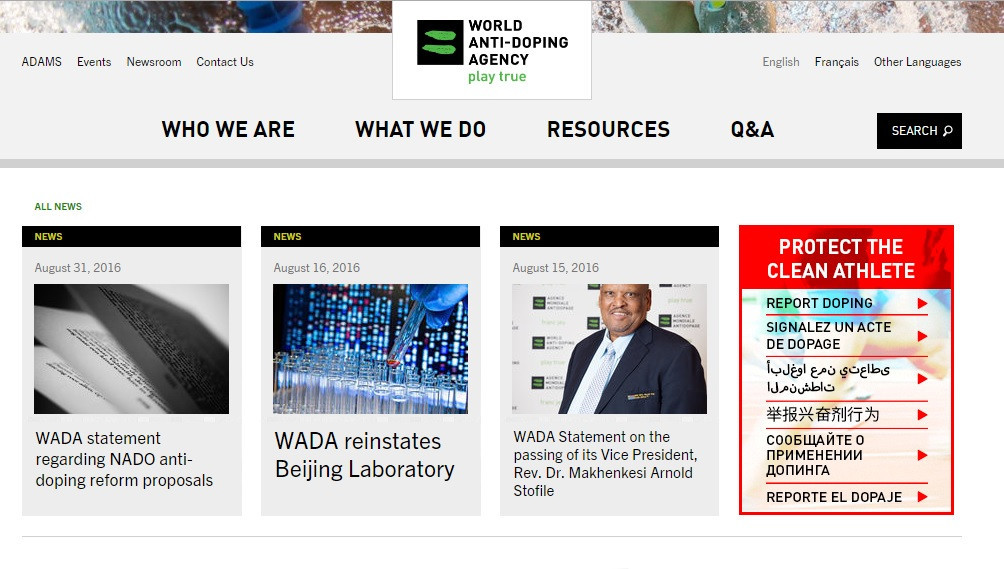 The World Anti-Doping Agency’s (WADA) website has been the subject of daily hacking attempts for almost three weeks, largely from Russia, the organisation’s director general Olivier Niggli has claimed.

Tension has grown in recent months between WADA and Russia after they called for the country, which remains embroiled in a doping crisis after the release of the McLaren Report, to be banned completely from the Olympic Games in Rio de Janeiro.

The Report, which uncovered the presence of an alleged state-sponsored doping scheme in the country at several major events, including the 2014 Winter Olympics and Paralympics in Sochi, led to the International Paralympic Committee suspending the entire Russian team from Rio 2016.

Niggli, who took over the role of director general from predecessor David Howman earlier this year, alleged in an interview with Norwegian broadcaster NRK that WADA and its informers were also receiving threats.

He is also suspicious that the homes of whistleblowers, who are often seen as key in the fight against doping, are being bugged.

Niggli described the attacks from the hackers as "irritating" though his claims that Russians are involved have not been confirmed.

"We've been undergoing attacks by hackers every day for almost three weeks,” the Swiss said.

"This is taking place all the time and is very irritating.

"We have serious suspicions those hackers are from Russia."

The accusations from Niggli come after the email address and Anti-Doping Administration & Management System (ADAMS) online whereabouts account of whistleblower Yuliya Stepanova, who helped reveal the extent of doping in her native Russia, were hacked.

It was concluded that someone was trying to get hold of her location after she and husband Vitaly Stepanov sought refuge away from Russia, where they have been ostracised and labelled as traitors.

WADA then took steps to block Stepanova’s account to prevent another similar hacking attempt after she had claimed she had feared for her life as a result of the incident.

"We are taking every measure possible [to protect ourselves]," Stepanova, an 800 metres runner who competed at the European Championships but was barred from taking part at Rio 2016, said following the attack.

"We are very worried about our safety because we have a small child."

During the Olympics, which concluded with the Closing Ceremony on August 21, the International Weightlifting Federation website was hacked by Iranians after a controversial no lift decision spelled the end of the medal hopes of Behdad Salimikordasiabi.