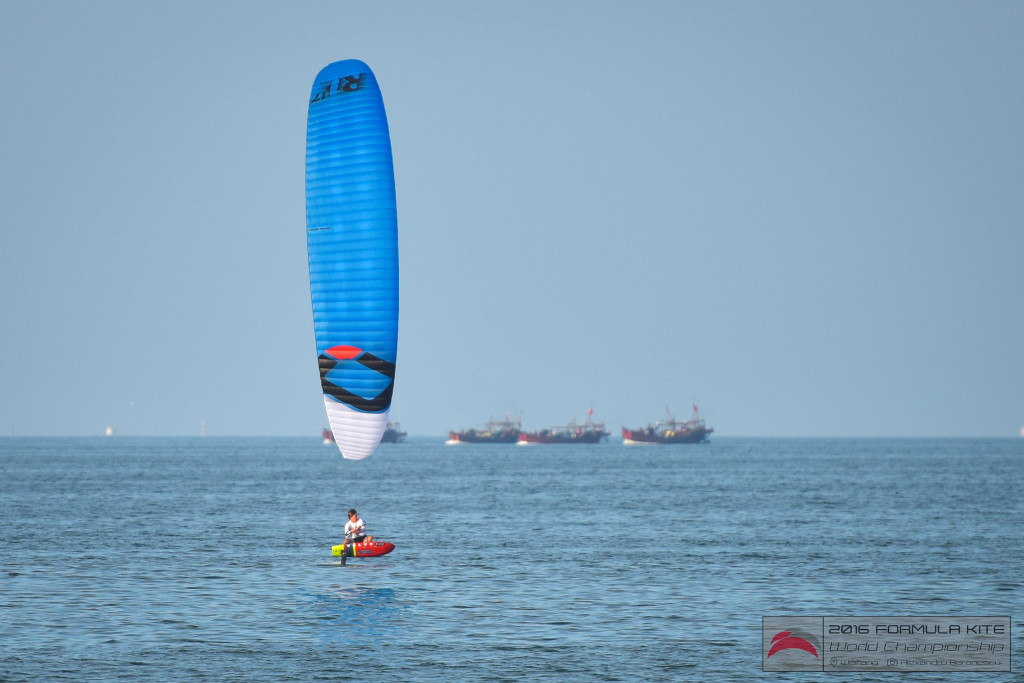 Minimal wind prevented any competition from taking place in the women’s or men’s gold and silver fleets at the Formula Kiteboarding World Championships in Binhai in China today, leading instead to discussions on the sport's possible Tokyo 2020 Olympic Games inclusion.

In the absence of action, the 60 riders from 19 countries were briefed on the status of the sport's bid for a slot in the 2020 Olympics and voiced some of their concerns.

Markus Schwendtner, the International Kiteboarding Association's (IKA) chief executive officer, outlined the possible pathway to an Olympics berth and the potential pitfalls that could lie in the way.

Key among the elite racers’ fears is that the Neil Pryde group, an equipment manufacturer, is attempting to establish a “one design” CR:X class with its convertible low performance foil, twin-tip board, and tube kite.

Riders were told that in line with their wishes, the IKA’s favoured option is to hold trials of leading high-performance hydrofoils and kites, choosing one of each for mass production as a one design model to be used in the Olympic Games and qualifier events.

This means all athletes can train and compete on the same equipment.

Outside the Olympic pathway events, development of foils and kites would continue apace as normal to ensure equipment keeps going forward and does not become quickly dated and outmoded.

If kiteboarding jumped the hurdles, any equipment could ultimately be chosen by the equipment and events committees of World Sailing, kiteboarding's governing body, under the International Olympic Committee (IOC), possibly in May next year.

World Sailing is not able to increase the 10 medals available to the governing body at Tokyo 2020, with the organisation due to discuss its plans for the medals line-up at its annual conference in Barcelona in November.

A final decision will be taken at a World Sailing special assembly in February by delegates from Member National Authorities (MNA).

A decision to include kiteboarding would then have to be agreed by the IOC in June.

However, there is opposition with World Sailing's former President Paul Henderson opting to challenge incumbent Carlo Croce on an anti-kiteboarding platform.

The election will be held at the Barcelona conference, with Henderson claiming the discipline should be included under the International Surfing Association banner after their sport was added to the Tokyo programme.

Kiteboarding - an extreme sport which combines wakeboarding, windsurfing, surfing, paragliding and gymnastics - was briefly chosen to replace windsurfing on the Olympic programme for Rio 2016 in May 2012.