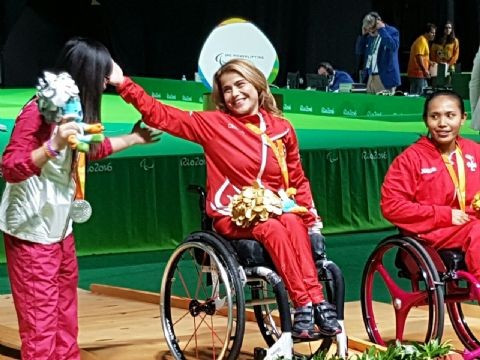 Turkey's Nazmiye Muratli and Cong Le Van of Vietnam both broke world records to claim the first Paralympic powerlifting gold medals at Rio 2016 in the women's under 40 kilogram and men's under 49 kilogram finals respectively at Riocentro.

Muratli claimed her second Paralympic gold medal as she broke the world record of rival and silver medallist Cui Zhe of China.

Muratli, a gold medallist at London 2012, tried to break her own record immediately after but failed to successfully lift 106kg.

Zhe added another silver medal to the one she won in this event at London 2012.

"It is very exciting and now I can take it easy," she said.

"I was very confident in winning the gold before I arrived at the Paralympic Village but since yesterday I felt like the silver was good enough.

Ni Nengah Widiasih of Indonesia claimed the bronze medal after a best lift of 95kg.

in the men's competition, Vietnamese powerlifter Cong Le Van won his first Paralympic medal as he secured victory with a world record lift of 181kg.

Hungary's Nandor Tunkel finished a large distance behind the top two as his highest weight of 155kg was 22kg less than second place.

"It is a dream come true," said Tunkel.

"I thought I could win a medal because I finished fourth in the world cup in January so I hoped I could win.

"It is Hungary's first medal at the Rio 2016 Paralympic Games so now I've got to support the other athletes and give them energy."