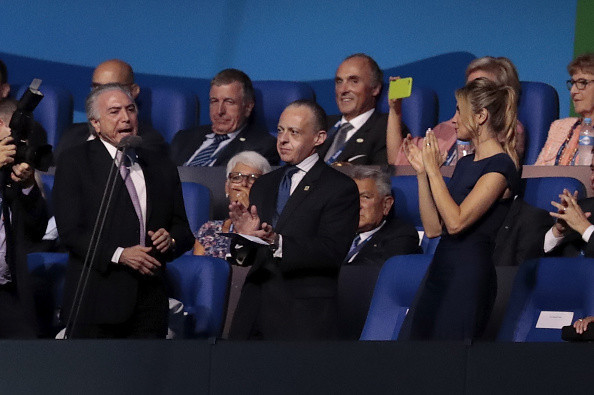 Temer was installed to complete the rest of Dilma Rousseff’s term, due to end on January 1 in 2019, after she suffered a crushing impeachment vote.

Rousseff was charged with spending without Congressional approval, as well as manipulating Government accounts to mask the extent of the budget deficit during her 2014 re-election campaign.

Temer, booed at the Opening Ceremony of the Olympic Games on August 5, was sworn in, despite the fact that, as Rousseff’s vice-president, he is also accused of the same allegations.

Protests have been common throughout Brazil during the ongoing impeachment trial, which has rocked Brazil to the core and sparked a fierce backlash from Rousseff’s supporters.

"Welcome to the 159 participating National Paralympic Committees and most of all show your support to the first-ever Independent Paralympic Athletes team, featuring two refugee athletes, from Syria and from Iran," said Sir Philip.

"At a Games full of inspiring stories, yours may well be the most inspiring of all.

"Athletes, you arrive ready to maximise your abilities and empower others to participate in sport.

"We have done our best to ensure a level playing field for all.

"In return, I ask you to play fair, abide by the rules and, most of all, have fun doing what you do best."

He added: "You have before you one of the world's most beautiful cities.

"Rio is powered by its people and the Cariocas know what these Games will do for driving social inclusion."

The atmosphere had also turned sour here when Rio 2016 President Carlos Nuzman referred to the Government during his speech.

"Many thanks to all who contributed to the success of the Rio 2016 Games," he said.

"I thank the partnership of the Federal,State and Municipal Governments, united for the realisation of these Games."

The Ceremony itself featured a spectacular wheelchair stunt and a colourful display of some of the fun and party life of Rio de Janeiro.

It began with American extreme wheelchair athlete Aaron Wheelz hurtling down a long ramp from the stands, jumping through a giant ring and landing on a huge inflatable mattress.

The mood then quickly switched to the more relaxed side of everyday Brazilian life - samba music and a typical day at a busy beach with surfers, swimmers and sun-seekers.

The centre of the Stadium, usually the stage for Brazil's greatest footballers, was transformed into the ocean and then into a beach.

The Parade of Nations saw each of the 159 National Paralympic Committees bring in a piece of a jigsaw, making up the picture of a heart in the centre of the stadium.

A representative of the Belarusian delegation carried a Russian flag as a gesture of solidarity with the country barred from competing at the Games.

The IPC introduced a blanket ban for the entire Russian Paralympic team in the wake of Richard McLaren’s damning report, which alleged the presence of a state-sponsored doping scheme at a number of major events, including the Sochi 2014 Winter Olympics and Paralympics.

The Ceremony then reached a climax when the Flame was lit by swimmer Clodoaldo Silva, one of Brazil's most decorated Paralympic athletes with 13 medals, including six golds.

The 37-year-old swimmer, who plans to retire after the Games, manoeuvred his wheelchair up a large ramp to light the Paralympic Cauldron.

The Ceremony finished as it began, with another samba.