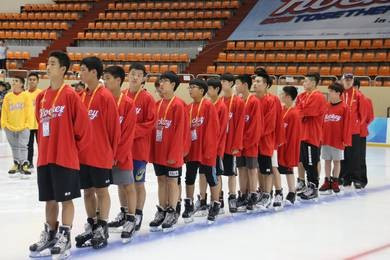 Around 120 players from across the world have taken part in a "Hockey Together" development camp organised by the Korean Ice Hockey Association (KIHA).

It was aimed at helping the players develop their skills and knowledge of the game, which the KIHA are attempting to grow in the country ahead of the nation staging the 2018 Winter Olympic and Paralympic Games in Pyeongchang.

National Hockey League (NHL) coach Andy Murray was joined by Jim Paek, director of the national team programme and head coach of the Korean men’s national team, in teaching the participants at the week-long development camp.

Thomas Wu, vice-president of the International Ice Hockey Federation, was also in attendance as he visited the Opening Ceremony.

A series of mentors, made up of officials within the sport's worldwide governing body, guided the coaches and team staff from the various countries through a series of workshops and sessions, providing constant feedback throughout the week.

The Jeonju Ice Hockey Association also introduced a new programme to help train coaches in the region as South Korea prepare to participate in the Winter Olympic ice hockey tournament for the first time in 2018.

Aside from the ice hockey workshops and training sessions, those who attended the "Hockey Together" camp were given a chance to sample the local culture and cuisine in Jeonju, located 194 south of capital city Seoul.

The IIHF said the participants "enjoyed all the city has to offer" during their stay in Jeonju.

The first edition of the camp was held in Seoul last year.

Both events have been supported by the Ministry of Culture, Sports and Tourism of Korea, the KOC and the KIHA.