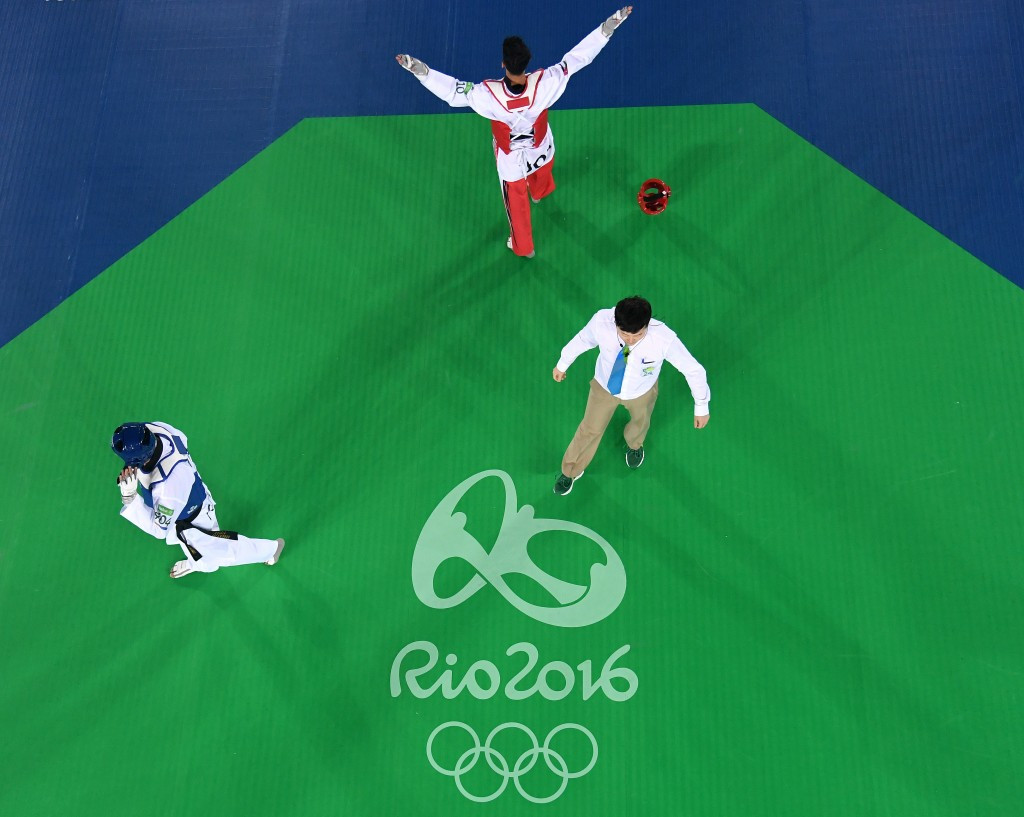 Britain's Jade Jones reigned supreme once again on the second day of taekwondo action at Rio 2016, while a new champion was born in the shape of Jordan's Ahmad Abughaush.

Abughaush produced shock victory after shock victory in the men's under 68 kilograms division, winning his kingdom's first Olympic medal before upgrading to a first gold.

In the final he met Russia's Alexey Denisenko, an in-form fighter who had earlier swept past Turkey's defending champion, Servet Tazegul.

But, as Jordanian supporters fantatically cheered and waved flags, their man rose to the challenge once again.

He held firm in a scoreless first round before taking the lead with a body shot in the second.

The bout then exploded into life in the third as Abughaush struck with a blur of blows, including a spinning head kick, to move out of reach.

Denisenko kept fighting, and was rewarded when his opponent virtually flung himself off the mat in an attempt to evade him.

It did not prove enough, however, and cars reportedly came to a halt on the streets of Amman to beep their horns in celebration as history was made.

Jordan had won three taekwondo minor medals when the sport was a demonstration event at Seoul 1988 and Barcelona 1992 - but this was their first official Olympic success.

"It's an indescribable feeling to win the first medal in the history of Jordan in all the sports," Abughaush said afterwards.

"It's also a great feeling to listen to the national anthem of Jordan being played in Rio in front of the whole world."

One of his first jobs after receiving his gold medal was to speak to the Royal Family.

"He said he was very happy and he was telling me about how all of the people of Jordan are very happy and are even shedding tears of happiness for me."

There was no immediate reaction from Queen Elizabeth after Jade Jones' success, but she was hailed as the queen of Wales afterwards.

She became just the fourth two-time Olympic champion after landing four successful headkicks to beat arch-rival Eva Calvo-Gomez of Spain in the under 57kg final.

After a 6-0 cushion at the end of round one, Jones was pinned back to 7-6 before a flurry of attacks engineered a 16-7 victory.

“It still doesn’t seem real that I won it in London so to win it again is just crazy,” the 23-year-old admitted.

“I didn’t realise how much pressure I’d feel coming into these Games; I started crying before my semi-final because I felt so nervous but I pulled it off when it mattered.

"I’m so happy, I knew inside that I was the best but you can still lose.

"That’s such a scary feeling.”

Kimia Alizadeh of Iran, who beat Jones at the quarter-final stage of last year's World Championships, also made history today with a first ever Olympic medal for a woman from her country.

Both bronze medallists wore a hijab on the podium as she was joined by Egypt's Hedaya Malak.

She had won her bronze medal match via a golden point over Belgium's Roheleh Asemani, the ex-member of the Refugees Olympic Team who secured Belgian nationality after qualifying for these Games.