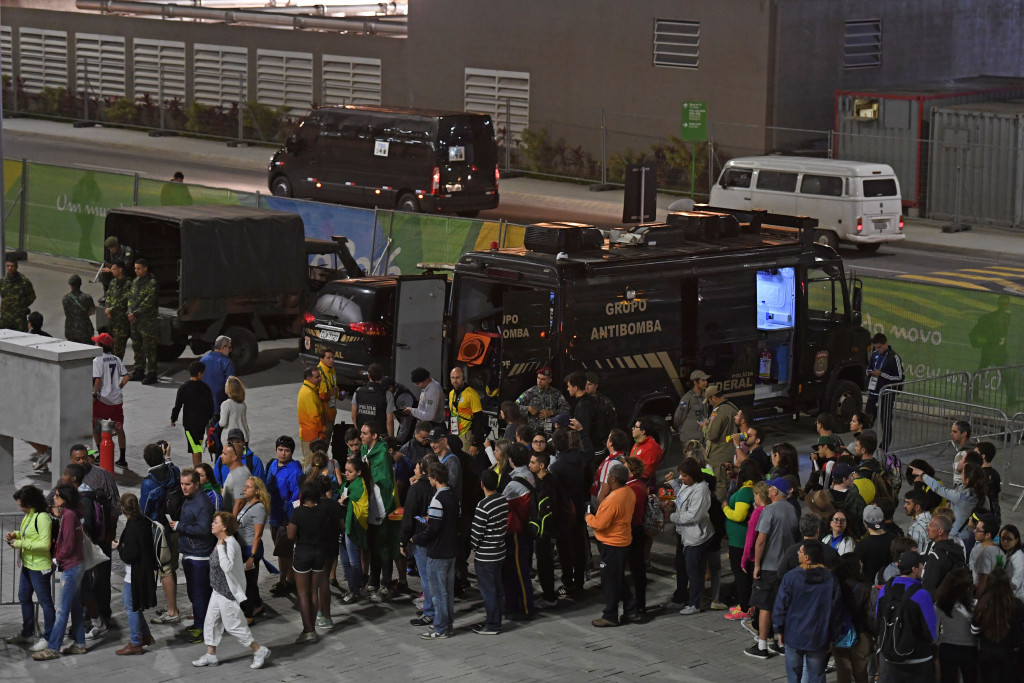 A basketball match began in front of an empty stadium following a bomb scare today as security problems continue at the Rio 2016 Olympic Games.

Security operatives carried out a controlled explosion after an abandoned rucksack was found inside the basketball arena shortly before the start of the men's clash between Nigeria and Spain in the Carioca Arena 1 on the Olympic Park here.

Spectators were not allowed inside the arena, but journalists were allowed to stay as the game began with no fans present.

"The backpack was near a trash container in the bathroom on the top floor," Rio 2016 said in a statement.

"A controlled explosion following the guidance of the Federal Police and the Army was undertaken.

"Inside the bag were found a tablet, a pair of socks and a jacket.

"Immediately after the detonation the public were allowed to enter."

It marks the second controlled explosion during a sport event here after a loud bang was heard on television screens midway through the men's cycling road race on Saturday (August 6).

The Games are continuing to be marred by a series of security incidents.

A media bus was hit - officially by stones although witness insist it was gunfire - on the road between the two Olympic hubs of Deodoro and Barra de Tijuca while a stray bullet also came within two metres of a New Zealand official at the equestrian venue.

Rio 2016 communications director Mario Andrada also explained today that a second bullet found in the stables of the Deodoro venue was the result of shots fired when police came to make arrests of those involved in the original incident in a favela community adjacent to the course.

They insist neither shot was deliberately aimed at the equestrian complex.

In a separate - and horrifying - incident, Andrada confirmed that three military police officials here to provide additional security during the Games had been shot when accidentally straying into a notorious favela community close to the city's international airport.

They were reportedly using a mobile phone app to navigate and took a wrong turn into the Complexo de Mare slum - leading to suspected drug traffickers opening fire on their vehicle.

"Three military police were shot in an area close to the Maracanã but closer to the road called the Yellow Line - an area that is dangerous," Andrada explained.

"They are not from Rio so they went into an area that is being taken care of by other groups.

"The national force personnel are doing a great job, most of them are working away from home.

"Security has been mobilised to make sure it doesn't happen again but also to bring to justice those who did it.

"We have to be focused and that does not mean we are concerned - but we have to be vigilant."