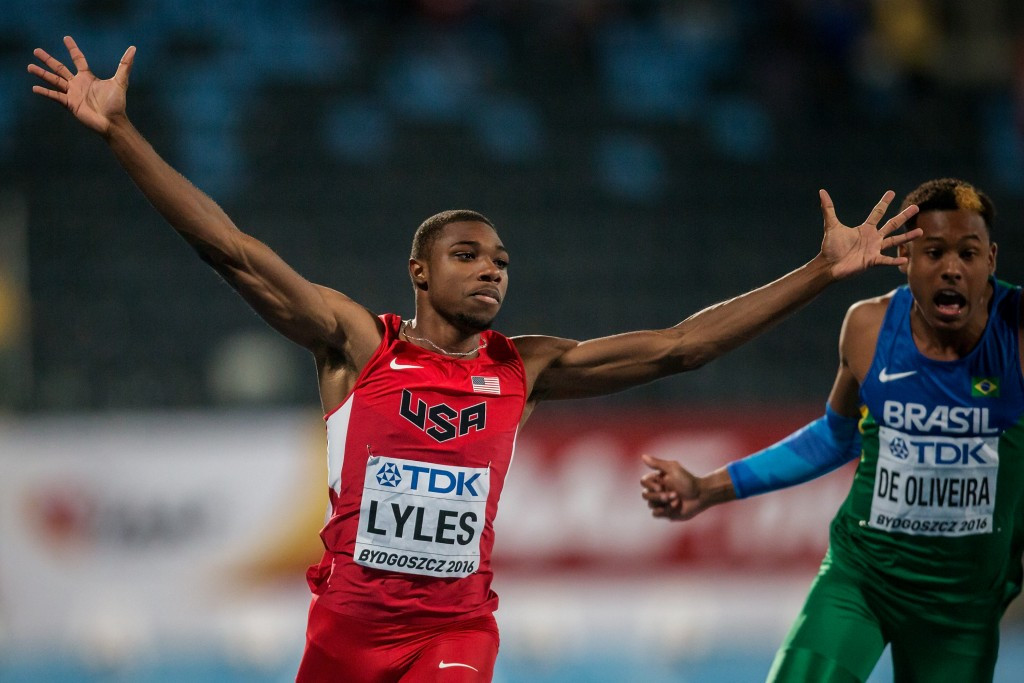 American Noah Lyles claimed the men’s 100 metre title on day two of the International Association of Athletics Federations (IAAF) World Under-20 Championships in Bydgoszcz in Poland.

Lyles, who was fourth at the US Olympic trials earlier this month, was the favourite pre-race and stormed to victory in 10.17sec.

He was behind at the halfway stage but the 19-year-old then clicked into gear and powered home.

“I knew I wouldn’t be on top at the start, so I just had to go through my whole race.

“To be honest, I’m surprised I was able to do all this.

“I was a little tired, but I’m really proud of my achievement.

“World junior champion has a nice little ring to it.”

In the women’s shot put final, gold went to Germany’s Alina Kenzel who did enough for the title with her opening throw of 16.91m.

She was just getting started, however, unleashing her eventual best effort of 17.56m with her third attempt.

“It's a really great feeling, I can't describe it,” said Kenzel.

A second German gold arrived in the decathlon with Niklaus Kaul triumphing on a Championship record 8162 points.

Maksim Andraloits of Belarus led going into day two by 117 points and increased that after posting the fastest time in the 110m hurdles, 13.95.

He went further ahead after a throw of 48.62m in the discus, with Kaul slipping to seventh with the 11th best effort of 41.80m.

The German’s best three events were to come, though, with his 4.80m pole vault 10cm higher than anyone else managed.

Andraloits still led by 370 points but in the javelin Kaul, a world youth silver medallist in the discipline in 2015, threw 71.59m, the best ever throw in an Under-20 decathlon.

The Belarussian only managed 48.79m and had to finish within four seconds of Kaul in the 1500m to win gold, but was eventually 22 seconds behind.

He had to settle for silver on 8046 with Estonia’s Johannes Erm clinching bronze on 7879.

The Championships were initially supposed to be held in Kazan, but they were stripped of hosting rights by the IAAF last year after Russia's suspension for widespread doping.