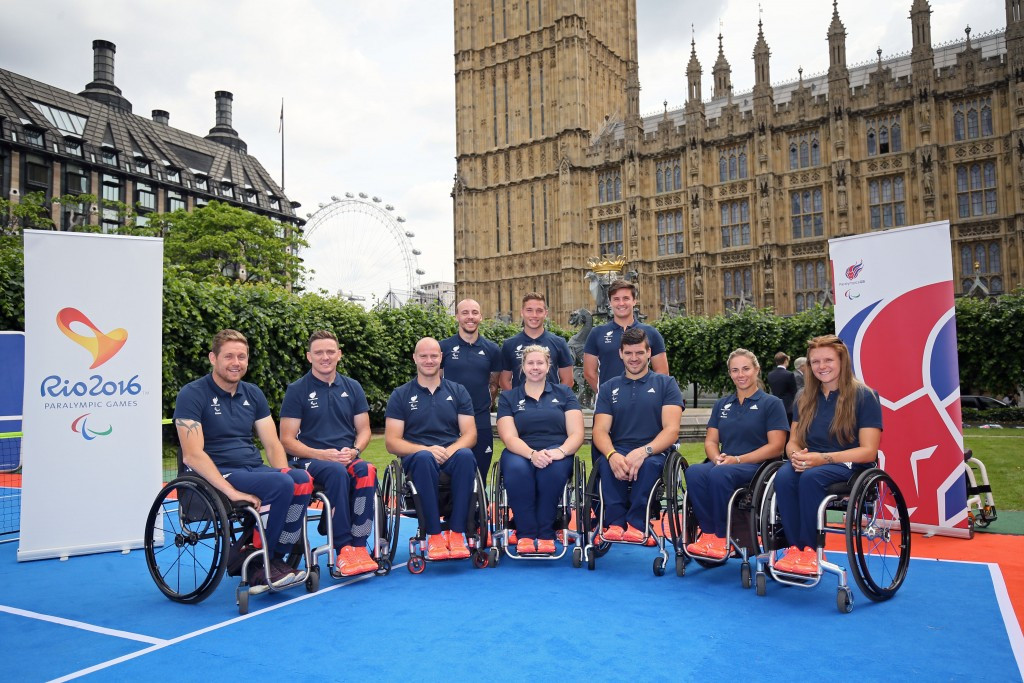 London 2012 silver medallist Andy Lapthorne is one of 10 players to be named today on Great Britain's wheelchair tennis team for this year's Paralympic Games in Rio de Janeiro.

Lapthorne won quad doubles silver four years ago with the now-retired Peter Norfolk and will be back competing at Rio 2016 in both the singles and doubles events.

"It's great to be on the plane to Rio," said the 25-year-old, currently ranked fourth in the world in singles.

"Obviously winning silver in my first Paralympics in London was very nice, but I've put four years of hard work in to make sure I'm best prepared to go one better in doubles in Rio and hopefully all the way in singles, too."

Lapthorne is joined by two other Paralympic medallists, Lucy Shuker and Jordanne Whiley, who together won bronze in the women’s doubles event at London 2012.

Whiley has since gone on to notch up seven Grand Slam doubles titles including the 2015 Australian Open and Wimbledon doubles crowns, as well as winning last year's US Open singles champion.

More recently, she won the 2016 French Open doubles tournament with Japan’s Yui Kamiji for the second time and was a semi-finalist in the singles.

"I'm delighted to be selected for Rio," said Whiley.

"This will be my third Paralympic Games and this is the one where I will be looking to bring home two gold medals.

"I've been working so hard for the last four years for this moment, so I fully intend to grab it with two hands."

Shuker is a 2013 Australian Open finalist and a multiple winner at Super Series and International Tennis Federation (ITF) 1 competitions.

Also selected in the women’s event is Louise Hunt, due to compete at her second Paralympics.

Reid is joined by former world junior number one Alfie Hewett, who has won the Junior Masters singles and doubles titles every year from 2012 to 2014.

The men’s team is completed by Marc McCarroll and David Phillipson, both of whom played alongside Hewett as part of the team that won gold at the 2015 World Team Cup.

In the quad division, for those with impairment that affects the upper as well as lower body, Lapthorne has been selected alongside fellow London 2012 Paralympian Jamie Burdekin.

Burdekin already has a Paralympic medal to his name having won quad doubles bronze with Norfolk at Beijing 2008.

The team is completed by Antony Cotterill, who has been playing wheelchair tennis since finding the sport while rehabilitating from breaking his neck in September 2003.

"I’m very proud of the 10 players selected from the Tennis Foundation’s world class performance programme to go to Rio as they have all been working incredibly hard to rise up the rankings and secure their place," said Geraint Richards, team leader for wheelchair tennis.

"With so many recent Grand Slam successes our hopes and expectations are high for medals at the Games and I’m sure they will all do ParalympicsGB proud come September."

Penny Briscoe, Chef de Mission for ParalympicsGB, added: "This is a very strong line-up of wheelchair tennis players and I am so proud to be announcing them today.

"Their performances over the last four years really speak for themselves and I have every confidence that they will excel this summer in Rio.

"I would like to pay credit to Geraint and his team at the Tennis Foundation for a fantastic job in delivering these athletes to this point and I know they will be working hard over the coming weeks to finalise preparations."

Today’s announcement, made by the British Paralympic Association at New Palace Yard under Big Ben in the Houses of Parliament, brings the number of selected athletes for ParalympicsGB to 171 across 14 sports.