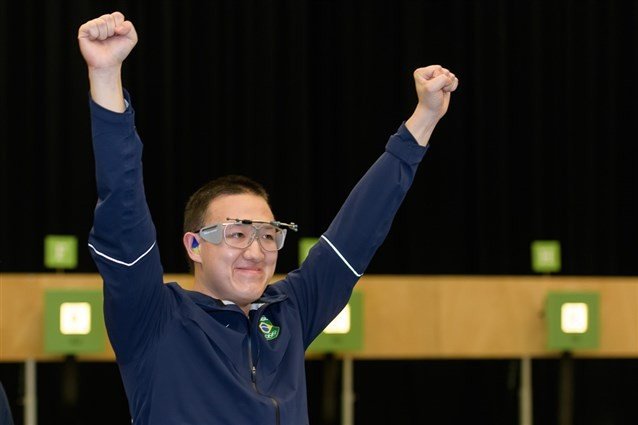 The 24-year-old’s closing score of 200 points saw him secure his second World Cup gold medal of season, having also triumphed at the opening stage held in Thailand’s capital Bangkok.

India’s Jitu Rai finished in second place with 199.5 points, while three-time Olympic champion Jin Jong-oh of South Korea rounded out the podium with 178.8.

After qualifying with 583 points, Wu started off the final with a disappointing 8.5 in his first series.

He soon recovered though and after the 12th shot, he had already reached the top of the scoreboard.

Shooting consistently in Azerbaijan’s capital, Wu defended the lead to keep Rai and Jin - the winner of yesterday’s men’s 50m pistol event - behind him and seal victory.

"The competition has been really tough," said Wu, ranked fifth in the world.

"I hit four eights, while I was expecting to shoot better.

"Right at the beginning of the final I made a couple of mistakes again, but I was able to control myself and that gave me confidence.

"We have the Olympic Games in front of us, and learning to control my emotions is crucial.

Boneva had never previously won a gold medal in this event, despite participating in 14 World Cup finals since 2006.

Malta’s William Chetcuti claimed the men’s double trap title, beating Italy’s Marco Innocenti 2-1 in a shoot-off after the pair finished level on 28 hits each in the gold medal match.

At the end of day four, China lead the medals standings with one gold, two silvers and one bronze, followed by South Korea with one gold and four bronzes.

The competition in Baku is due to continue tomorrow with gold medals due to be awarded in the men’s 50m rifle prone and the men’s 25m rapid fire pistol events.