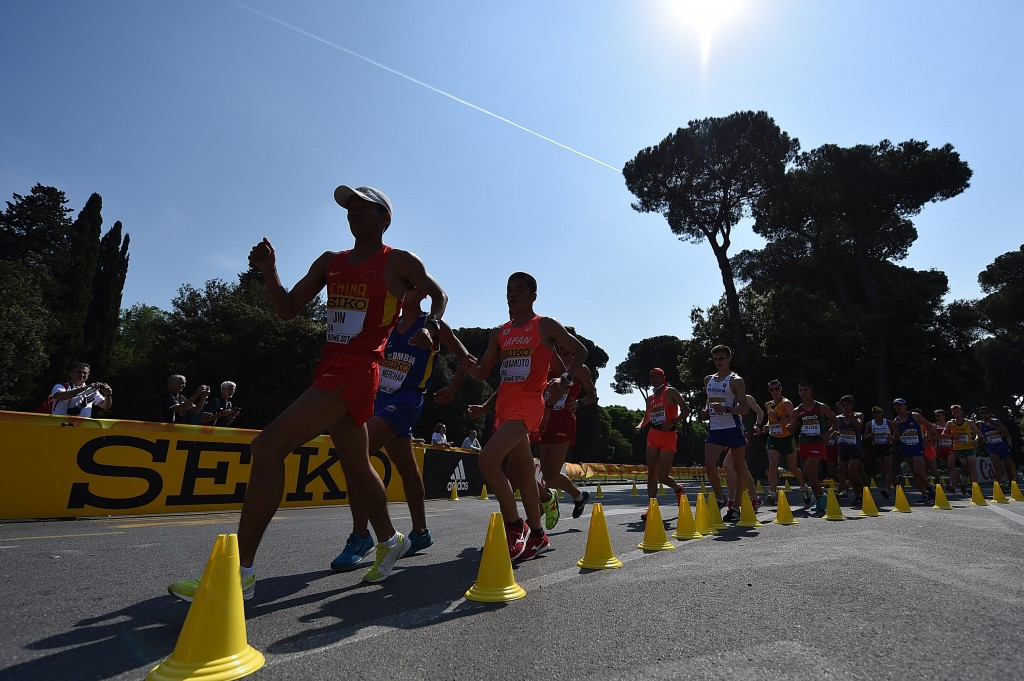 China took full advantage of Russia’s enforced absence from the International Association of Athletics Federations (IAAF) World Race Walking Team Championships in Rome as they ended the first day with golds in both the men’s and women’s 20 kilometre events.

On a course partially shaded by the Colosseum, victories from the two race favourites Wang Zhen, the 2012 men’s champion and double world silver medallist, and women’s world record holder and double world champion Liu Hong, established their country as the most successful in the competition’s history with 18 gold medals.

It was a day of high drama – and disappointment – for home hope Eleonora Giorgi as she was disqualified for lifting just as she was about the enter the stadium while contesting second place with the eventual silver medallist, Maria Guadeloupe Gonzalez.

The Mexican finished with a national and area record of 1:26.17, but there was never any doubt from virtually the first steps that victory would go to the world champion – even if she had claimed a recent cold had robbed her of peak fitness.

The 28-year-old Liu was never headed, and finished in 1:25.59, the second fastest time ever in this competition and just 17 seconds off the Championship record.

She will now seek to complete her grand slam of titles with an Olympic gold in Rio.

Liu’s compatriot Qieyang Shenjie took third place in 1:26.49, despite suffering a heavy fall in the second half of the race after tripping on a cone while turning.

Fourth place went to Brazil’s Erica De Sena in an area record of 1:27.18, with popular 35-year-old Elisa Rigaudo, the 2008 Olympic bronze medallist, going some way towards making up for the home disappointment of Giorgi as she matched her previous best placing of fifth – back in 2004 – by finishing in 1:28.03.

“I was always in front but I felt a bit nervous because I didn't know if the others had more energy or if their rhythm could speed up,” said Liu.

“I had to keep turning to check them and keep up my speed.”

Wang’s compatriot Cai Zelin, the 2014 silver medallist, led the men’s race through the halfway point in 40.29.

By this point Spain’s world champion Miguel Angel Lopez was back in 37th place, 22 seconds adrift of the leaders.

Zelin was soon caught, however, and as the race entered its final half hour there were numerous contenders in the lead pack including the defending champion, Ruslan Dmytrenko of Ukraine

Canada’s world bronze medallist Ben Thorne took a turn in the lead, but soon it was Wang who hit the front, leading through 15km in 1:00.09.

Within five minutes, Wang had a seven-second lead over Cai, with Thorne, Dane Bird-Smith of Australia and Spain’s Alvaro Martin contesting third place.

As the bell went for the final lap, Wang had a 14 second lead.

Martin moved through to take second place from Cai, but the Chinese athlete responded to reclaim silver medal position shortly before entering the stadium and finished in 1:19.34, with Martin just two seconds behind him.

“I did not think I had the right training to win a medal,” said Wang.

“We just thought this was a good chance to test our condition before the Olympics, and it gives me confidence for Rio.”

China won both team events, with Canada and Ecuador taking silver and bronze in the men’s race and Australia and Colombia doing the same in the women’s race.

And the efforts of Liu and Wang completed a full house of golds for China on the first of the two days of competition, with the 50km scheduled for tomorrow.

Earlier in the day China’s Jun Zhang won the 10km under-20 men’s race in 40.23 ahead of Spain’s Manuel Bermudez and Noel Ali Chama of Mexico.

And the 10km under-20 women’s race saw another Chinese 1-2 as Ma Zhenxia took gold by just six thousandths of a second after a photo-finish with compatriot Ma Li after both had been given a time of 45.25.