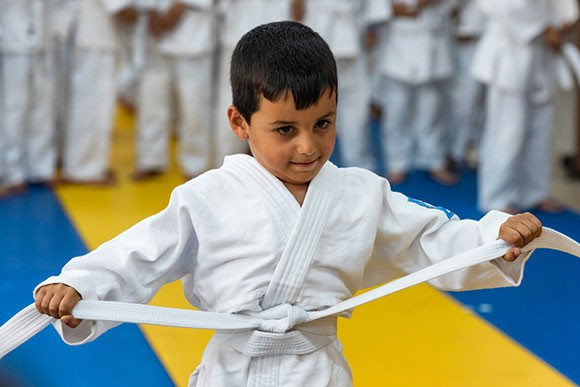 The International Judo Federation's (IJF) award-winning development project in the Kilis refugee camps on the Syrian/Turkish border has been featured in the governing body's latest #JudoForTheWorld video.

More than 130,000 refugees have been rescued in the Kilis region - which is more than the local population - but judo has brought some joy into the life of youngsters who are otherwise coping with severe hardships.

At present more than 500 children take part in judo activities which are provided weekly with the support of the Turkish Judo Federation (TJF).

The film features the main players who are involved in the scheme, and highlights the challenge of welcoming the refugees and offering them the best possible conditions to dream of a better life.

Representatives from the IJF and the TJF met with children and their parents in Kilis, as well as other people supporting the project.

Five-hundred pieces of sporting equipment were donated during a five-day visit for the creation of the film.

it is hoped that through judo, the children involved can learn respect and friendship, as well as other values.

The sport also provides a confidence boost to a population that has been severely affected by years of conflict.

The IJF first launched the project at a single refugee camp two years ago, before visiting a second camp.

In future the scheme may be spread to an orphanage in the area.

The film was created after the project had been awarded the Sheikh Mohammed Bin Rashid Al Maktoum Creative Sports Award in December.

The IJF were picked as a winner after submissions from Association of Summer Olympic International Federations (ASOIF) members, who were allowed to submit one entry each.