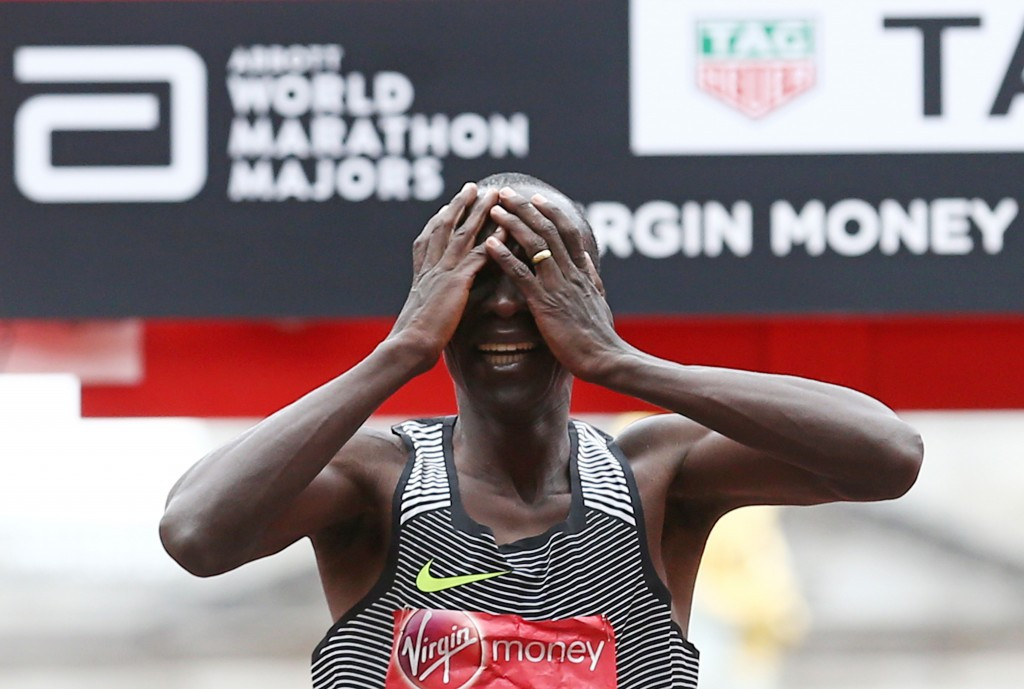 Kipchoge, who shot to prominence as an 18-year-old when winning the 5,000 metres title at the 2003 World Championships in Paris, has shown remarkable consistency since switching to the 26.2 miles distance three years ago.

After winning his debut in Hamburg, he finished second in Berlin later that same year and then produced further victories in Rotterdam, Chicago, London last year before going one better in the German capital with a personal best time of 2 hours 04min 00sec.

It marked another step-up, however, as the 31-year-old broke the 30 kilometres world best and smashed the course record before narrowly missing out on Dennis Kimetto's world record mark of 2:02:57.

He led the field through halfway in 61min 24sec before breaking clear with team-mate Stanley Biwott as old track sparring partner Kenenisa Bekele of Ethiopia hung on behind.

With Bekele dropped, the duo allowed the pace to slow as a tactical dual developed before Kipchoge ramped up things again to open clear daylight.

He used his track speed to charge down the Mall before shaking his head in a mixture of disbelief and bittersweet elation after successfully defending his title in 2:05.05 - so close to Kimetto's world record.

If he had made his move a mile earlier, surely the world record would have been his.

"It was a good course," he said once regaining his composure.

"The support was perfect - the crowd was fantastic and it was good to get a PB (personal best)."

Biwott ran a personal best 2:03:51 for second place as Bekele hung on for third in 2:06:36, an impressive feat considering his build-up had been handicapped by injury.

Ghirmay Ghebrelassie of Ethiopia finished fourth in 2:07.:46 and 2012 and 2014 winner Wilson Kipsang fifth six seconds behind as the field paid for the fast start.

He finished 13 seconds and two places behind Tsegai Tewelde, who has lived in Scotland since absconding from the Eritrean team at the 2008 World Cross-Country Championships in Edinburgh and is now eligible to compete for Britain.

Sumgong had been in superb form coming into the women's race, but was left clutching her head on the road after being tripped approaching a water station by Ethiopian rival Aselefach Mergia after almost two hours of running.

She swiftly recovered to rejoin the leading group, however, before taking the lead on the approach to the Mall.

It marked the biggest win of Sumgong's career, which had been previously topped by victory at the 2013 Rotterdam Marathon, as well as runners-up spots in Boston, Chicago and New York City.

"I am very happy to have won," she said.

"The Ethiopian runner clipped my leg and I went down.

"I got up again as quickly as possible and got my pace back.

"The fall really affected me and I was unsure if I could continue.

"I have a cut on my head and on my shoulder, they are bleeding but I don’t feel any pain yet - I did feel it in my legs so I am so surprised I won."

Sumgong failed a doping test for banned substance prednisolone after her second-place at the 2012 Boston Marathon only to be cleared following an appeal to the International Association of Athletics Federations (IAAF) as the local injection she had received was permitted.

Priscah Jeptoo, the Kenyan winner in 2013, finished down in eighth today in 2:27:27, one place and 63 seconds ahead of team-mate and 2011 and 2012 winner Mary Keitany, who had also been involved in the fall with Sumgong but who appeared to suffer much worse.