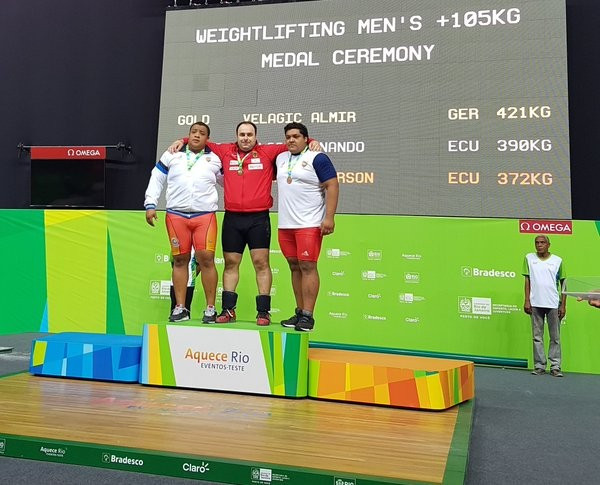 Reis, the two-time Pan American Games champion regarded as the best prospect of a home weightlifting medal at Rio 2016, entered the arena to huge applause before effortlessly lifting 190kg, the highest snatch lift of the day.

But in his second attempt at 200kg, the 26-year-old man mountain dropped the weight with a grimace before clutching his right arm in pain and exiting the competition.

While disappointed, he said afterwards that he was did not think the injury was too serious, before departing to hospital for precautionary scans.

In his absence, Velagić, a Bosnian-born German who finished eighth at Beijing 2008, lifted a total of 421kg to win with consummate ease in an event doubling as the South American Championships.

Fernando Salas of Ecuador was named South American champion after claiming silver with 390kg ahead of compatriot Anderson Calero, who lifted 372kg for continental silver and overall bronze.

No South American bronze medal was awarded due to only three athletes having completed the competition.

As well as Germany, lifters from Thailand and United States also participated in the four-day event, which was taking place here rather than in the nearby yet-to-be-completed Rio Centro venue to be used during the Olympic Games itself.

This was not a problem, organisers said, because the event was designed to test the three areas of the field of play, results service and workforce.

It therefore made more sense to hold the competition in an already operational venue.

“Not everything was yet on Olympic level, but this is the idea of a test event, to work out what improvements are required.

“We spoke to the Thai, American and German teams as well as the South American ones and they were all very happy.”

Officials are confident all the apparatus will be easily transferable to the Rio Centro venue, where the only challenge is a relatively low ceiling of 10 metres, leaving little room once the stage and scoreboard is installed.

None of the wider problems associated with the Games will “have a significant impact on the competition”, Adamfi added, including budget cuts resulting from Brazil’s worst recession in 25 years.

It followed a first Venezuelan gold earlier in the week for Junior Sanchez in the under 77kg event.

Colombia won five gold medals across the whole event courtesy of Mosquera Valencia Francisco, who won the men’s under 62kg event with 298kg and Luis Javier Mosqiera Lozana, who finished on top of the under 69kg standings with 306kg.

On the women’s side, Lina Marcela Rivas Ordores won the women’s under 63kg competition with a total haul of 219kg, while Segura Segura Ana Iris managed 179kg for under 48kg honours.

Brazil were awarded the corresponding women’s title ahead of Chile and Peru.

There was Brazilian victory in the women’s under 53kg event for the home crowd to celebrate as Rosane Dos Reis Santos lifted 195kg to claim gold.