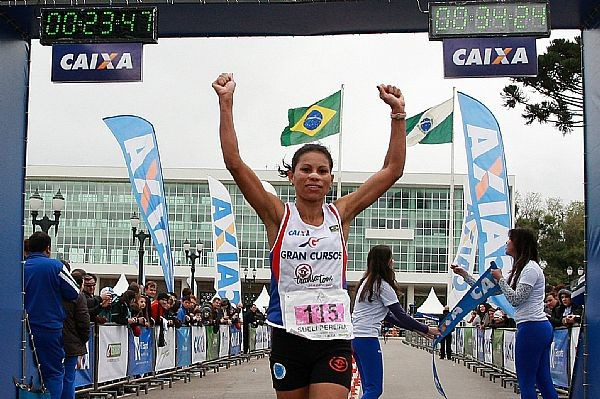 Brazilian marathon runner Sueli Pereira Silva has been suspended for four years after testing positive for the banned blood boosting drug erythropoietin (EPO), it has been announced.

The suspension by the Superior Court of Sports Justice ends the chances of the 39-year-old Silva competing for her country at this year's Olympic Games in Rio de Janeiro and probably signals the end of her career.

It left her ranked fourth among Brazilian female marathon runners, with the top three set to be selected for Rio 2016.

In both races Silva was the top-placed Brazilian.

According to Brazilian newspaper O Globo, Silva's 21-year-old son Ronald Moraes Silva, a nationally-ranked 10 kilometres runner, has also been suspended for four years after testing positive for EPO following the Race of Kings.

Earlier this month it was announced Russian rugby players Alexey Mikhaltsov and his wife Alena had tested positive for the banned substance meldonium.

It is the second blow for athletics in Brazil after it was revealed earlier this month Ana Cláudia Lemos, the country's top female sprinter, has tested positive for an unspecified drug and was facing a four-year ban which will keep her out of Rio 2016.

One of Brazil's most successful sprinters of recent years, Cláudia Lemos made her international breakthrough with two gold medals at the 2010 South American Games in Medellín.

She then claimed 200 metres and 4x100m relay titles at the 2011 Pan American Games in Guadalajara, also claiming a similar double at that year's World Military Games in Rio de Janeiro before finishing seventh in the relay at London 2012.

She competed at the 2013 World Championships in Moscow but had been less successful in recent years, although she had run a 100m personal best of 11.01 in 2015 and had been aiming to compete in both sprints and the relay at her home Olympics.