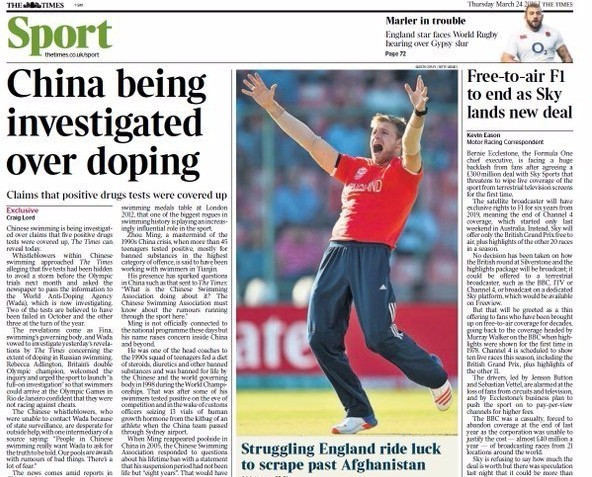 China has become the subject of a fresh doping crisis after the World Anti-Doping Agency (WADA) launched an investigation into alleged cover-ups of failed drugs tests in swimming, according to reports.

The Times has reported that a total of five Chinese swimmers tested positive, with two coming in October and three at the turn of the year.

These results were concealed and covered-up, the reports claim.

They also accused swimming coach Zhou Ming, who was banned for life in 1998 for involvement in a previous doping scheme in the sport in China, of working with swimmers in Tianjin.

"People in Chinese swimming really want WADA to ask for the truth to be told," a whistleblower told The Times.

"Our pools are awash with rumours of bad things.

A statement from WADA said they are currently going over the information they have been given by the newspaper and will "monitor the situation closely", with spokesperson Ben Nichols insisting they would tackle the claims "head on".

WADA is also discussing the accusations of Zhou's involvement with the International Swimming Federation (FINA).

"In particular, The Times article cites whistleblower information alleging that five positive doping tests, from end-2015 and early 2016, were concealed ahead of next month’s Olympic trials in China.

"The Times article also cited concerns raised by the whistleblowers that they “were unable to contact WADA due to state surveillance".

"WADA acknowledges the courage that it takes to stand up to unethical practices and the value that such information offers to clean sport.

"As such, the Agency has been working to enhance its whistleblower process so that athletes, their entourage and others can feel more protected when providing information via WADA’s website.

"It is our hope that, with an enhanced process, more individuals with high-value information will be willing to come forward, enabling the Agency and its partners to actively pursue anti-doping rule violations that may otherwise go undetected."

Xue Yinxian, a doctor for the Chinese Olympic team, claimed back in 2012 that doping in the country was also “rampant in the 1980s”.

He became the first male swimmer from China to win gold at the Olympic Games after taking the 400 and 1500 metre titles at London 2012.

No mention of the suspension had been made during or prior to the Asian Games with the Chinese Anti-Doping Agency explaining that it did not immediately announce the sanction because it only reveals positive tests every three months.

A statement from FINA admitted that some Chinese cases were being investigated and that they would leave "no stone unturned" if more action was needed.

"There are a small number of cases of failed doping controls by Chinese swimmers currently being investigated under the jurisdiction of CHINADA, the WADA-recognised Chinese Anti-Doping Agency," the governing body said.

"FINA and WADA are both fully aware of these cases, but we are bound by confidentiality until the moment an athlete is actually banned.

"FINA reiterates its unequivocal commitment to upholding the WADA Code and a desire to collaborate with WADA, as partners in the global fight against doping, to establish urgently whether any of the allegations made require further investigation.

"If the information we receive does merit further investigation, then FINA will leave no stone unturned in ensuring justice is served for the overwhelming majority of aquatics athletes who are clean."

The news of alleged cover-ups in China comes after WADA said it would investigate claims made in The Times yesterday concerning a systematic doping scheme in Russian swimming.

According to The Times, Sergei Portugalov, the doctor allegedly behind the doping programme in athletics, has been encouraging swimmers in Russia to take banned substances.

WADA described accusations of involvement from Portugalov as “concerning” and revealed they had written to the International Swimming Federation (FINA) about the reports.