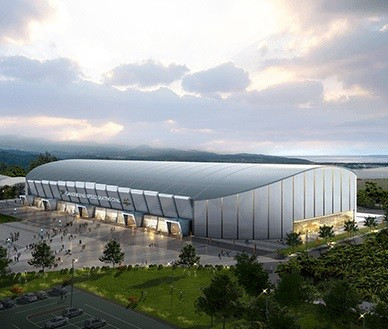 Discussions have taken place concerning the Gangneung Oval possibly becoming a permanent sporting facility for South Korea as Pyeongchang 2018 are considering keeping the venue intact following the conclusion of the Winter Olympic and Paralympic Games, it was revealed here today.

The facility, which will play host to speed skating competitions during the first-ever Winter Games to be held in South Korea, was set to only be used on a temporary basis.

It was expected to be demolished once the event, which runs from February 9 to 25, had finished but "positive" talks have been held about ensuring a future legacy for the venue.

The arena, part of the Gangneung Olympic Park, is still in its early construction phase and is nearly a third complete, according to organisers.

It will have a seating capacity of 8,000 and is due to stage a key test event in 2017 as the Gangneung Oval will host the International Skating Union (ISU) World Single Distances Speed Skating Championships from February 9 to 12.

A decision on the future of the venue could be made later this year, with further meetings planned over the coming months to decide whether it will be kept or knocked down.

The Gangneung Oval was the first stop on the venue tour for the International Olympic Committee (IOC) Coordination Commission, who began a three-day visit to inspect Pyeongchang 2018's preparations today.

Progress of construction dominated the agenda as the Commission, led by chair Gunilla Lindberg, were given a tour of the Gangneung Olympic Park before they then made the short journey to Pyeongchang to take a look at the Olympic Village.

Pyeongchang 2018 and IOC officials are continuing to arrive here ahead of an extensive day of meetings tomorrow, where recent and future test events and pressing construction deadlines are set to feature prominently.

Further talks and discussions are planned for Wednesday (March 16) before the IOC and Pyeongchang 2018 will hold a joint press conference to conclude the sixth Coordination Commission visit.