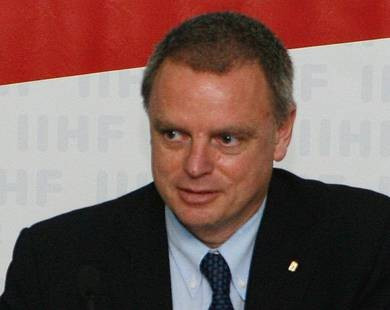 International Ice Hockey Federation (IIHF) general secretary Horst Lichtner has urged the National Hockey League (NHL) to "seriously consider" committing to participating at the next two Olympic Games in order to best capitalise on the commercial opportunities provided by the Chinese market at Beijing 2022.

Negotiations continue to stall between the NHL, IIHF, International Olympic Committee (IOC) and other stakeholders over participation at Pyeongchang 2018.

Gruelling journey times and a time difference of at least 13 hours has created extra doubt among North American clubs.

Deciding who pays transportation and insurance costs is another major obstacle.

The World Cup of Hockey, scheduled to run from September 17 to October 1 in Toronto, is seen as a pivotal opportunity for both sides to meet and reach a consensus.

The participation of players from the world's top league has been deliberated on a Olympics-by-Olympics basis ever since NHL players first participated at Nagano in 1998.

It is invariably a difficult process, however, with a deal reached for Sochi 2014 just seven months before the Games began.

NHL officials are far more enthusiastic about participating at Beijing 2022 due to the commercial opportunities provided by the Chinese capital.

IIHF President René Fasel has warned them, however, that they cannot pick and choose between Olympics.

Lichtner speculated that not participating at Pyeongchang 2018 would harm the NHL's long-term prospects within the world's most populous country.

"We are trying to find a solution for two Olympics instead of one," he told insidethegames here during the Winter Youth Olympic Games.

"This makes the process even more complicated, but the fact the 2022 Games are taking place in China helps us.

"I think if you asked the NHL, they would not be able to describe exactly what they want from China, but they know it is one of the growing markets in the world.

"It brings a lot of opportunities for them, but if they are not going to the Olympics, with the Chinese political system, they would not like this.

"There are good reasons for the NHL to seriously consider that we do this deal."

Lichtner, a former marketing director of the German Football Association who took up his IIHF post in 2006, insisted progress is being made.

"Of course, the Olympic system is evolving and things are going on now, and people are discussing," he added.

"What we need to do is tell them why, how, and how we can do that.

"It’s a complicated picture, there’s a lot of detailed work, but we will get there."

insidethegames understands that a major problem relates to who pays transportation and insurance costs, something usually covered by the IIHF.

There are suggestions that the NHL is being asked by the IOC to cover these costs themselves.

Christophe Dubi, the IOC's Executive Director for the Olympic Games, claimed in response to a question about this that it is in the "best interests of all parties that the players come".

"At present what is being discussed, is the practical implementation of these [transportation and insurance] measures," he told insidethegames here.

The return of the NHL-organised World Cup of Hockey in September following a 12-year absence has been interpreted by some as another challenge, as having two major international events involving the league's top players within a relatively small 17-month time-frame may prove difficult.

IIHF officials deny it presents a risk and claim it will be an opportunity to discuss Olympic participation.

"We’re be all there in September, sitting together for two weeks, so that may be good surroundings to find other solutions as well," Lichtner added.

"We have a target of when everybody meets in September.