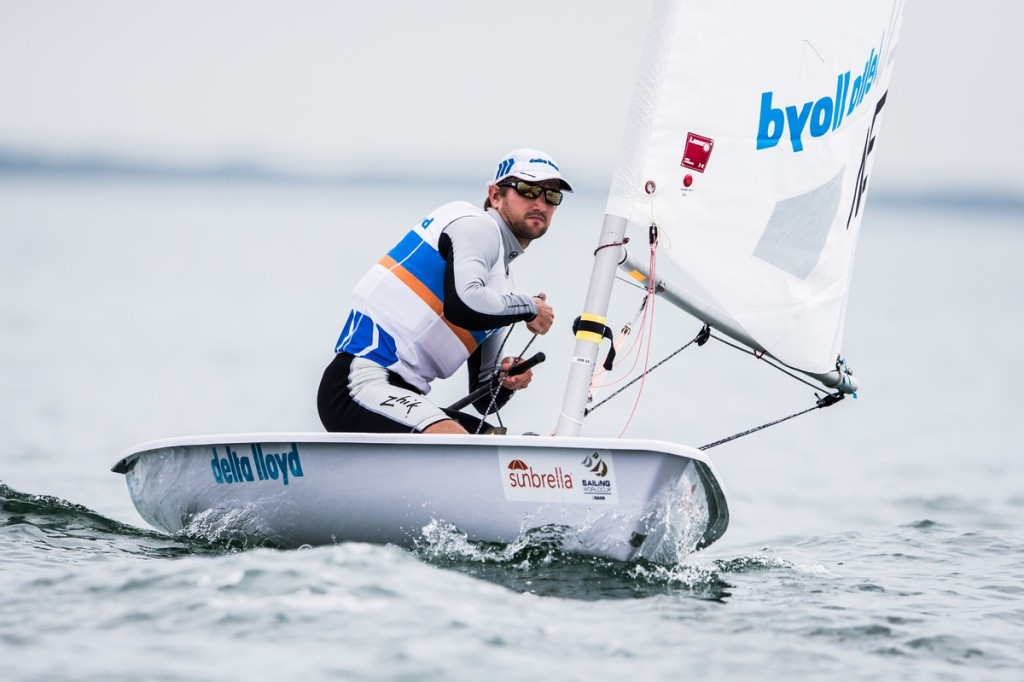 The Netherlands’ Rutger van Schaardenburg made an impressive start to the Sailing World Cup in Miami after claiming victories in the first two races in the Laser division’s yellow group.

The first race was a wire-to-wire win by nearly two minutes, but the second required some work after Van Schaardenburg struggled off the line.

Halfway up the first beat, a favourable shift helped him to get back in touch with the lead group and he was then able to move from 10th to first on the run.

"It's obviously an ideal start," said the tall Dutchman.

"For me it was important not to have very bad races because tricky wind conditions today - light wind [that] could come from any direction - so I didn't want to start with a bad result and that worked out.

"Downwind [it was] both being in the pressure and having the opportunity to go quick not having anyone on the back blocking the wind from me.

"Freedom, pressure and obviously the boat speed was good."

Milivoj Dukic of Montenegro also had a strong day with a third and a second, as did Van Schaardenburg's fellow countryman, Nicholas Heiner, who stands third with nine points.

In the second group, it was London 2012 Olympic Gold medallist Lijia Xu of China crossing the line first, followed by Italy’s Silvia Zennaro.

Following two races in the blue and yellow 49er fleets, Austrian pair Nico Delle-Karth and Nikolaus Resch and Portuguese duo Jorge Lima and Jose Costa are tied on four points after a win and a third apiece.

Having won the opening race in the yellow fleet, Denmark’s Jonas Warrer and Anders Thomsen crossed the finish line of the second thinking they had the perfect start with back-to-back victories before being black flagged to leave them in 25th place in the overall standings.

The day's other race win went the way of France's Kévin Fischer and Yann Jauvin.

In the 34-boat 49erFX pack, Norwegian twins Ragna and Maia Agerup took the single race win late in the day and were followed by Danish sisters Maiken Foght and Anne-Julie Schütt.

The race for first in the men's 470 race came down to a battle between South Africa’s Asenathi Jim and Roger Hudson and the Ducasse brothers of Chile, Andres and Francisco.

The South Americans had the upper hand initially, but Jim and Hudson ground them down on the second beat to take the win with the Australian team of Thomas Klemens and Timothy Hannah third.

The Brazilian duo of Fernanda Oliveira and Ana Luiza Barbachan won the only women's 470 race, getting the upper hand in a see-saw battle with Israel’s Tsuf Zamet and Stav Brokman.

Zamet and Brokman led around the first mark, and stretched away to nearly a half minute lead on the run.

But Oliveira and Barbachan turned the tables on the second beat and took over the lead, which they held for the remainder of the race as Spain’s Marina Gallego and Fatima Reyes finished third.

Elsewhere on the opening day of action, Dutch racers Mandy Mulder and Coen de Koning enjoyed the best of the day in the Nacra 17 with two single digit scores, a first and a seventh.

Chinese light wind specialists came to the forefront in the men's RS:X as Chunzhuang Liu claimed the opening victory and was followed by compatriot and 2015 Olympic test event winner Aichen Wang.

The Netherlands' Lilian de Geus took the single women's RS:X race, while in the Finn, London 2012 silver medallist and two-time world champion Jonas Hoegh-Christensen of Denmark rounded the first mark in third, before jumping into the lead by the leeward mark and holding on for victory.

The Paralympic events saw France’s Bruno Jourdren, Eric Flageul and Nicolas Vimont-Vicary come out on top in the single sonar racing and in the one race completed in the 2.4mR, victory was picked up by Canada's Bruce Miller.

Racing is due to resume tomorrow with the Race Committee using the day to catch up on the schedule having lost races today.