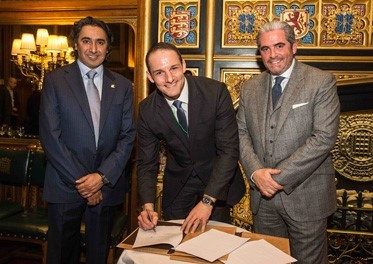 A new collaboration has been signed between the Commonwealth Games Federation (CGF) and International Centre for Sport Security (ICSS), it was announced today.

The cooperation agreement is designed to help protect and safeguard the integrity of Commonwealth sport, officials claim.

Its announcement has been made to coincide with the first full meeting here of the CGF's ruling Executive Board since Scotland's Louise Martin was elected President in Auckland last September.

As part of the far-reaching cooperation agreement, the CGF and ICSS EUROPE will work in partnership to promote the highest standards of good governance, transparency and integrity in sport, it is claimed.

The CGF will also collaborate with ICSS EUROPE as it looks to help encourage the development of a global independent, neutral, multi-stakeholder integrity alliance for sport.

As part of the collaboration and in line with its commitment to service sport and support organisations across all sectors, ICSS EUROPE will also independently audit the CGF’s governance model and assist with the development of a code of conduct on sports betting and integrity.

The official signing took place last night at a reception in the House of Commons in London.

The event was held with the special permission John Bercow, Speaker of the House of Commons.

“As a values-driven movement connecting athletes and communities across the Commonwealth, we are proud to be a leading voice in the drive to protect, promote and safeguard sport and look forward to a successful collaboration with ICSS EUROPE and its partners," David Grevemberg, chief executive of the CGF, said.

“Good governance and strategic partnerships are key pillars of Transformation 2022, and this announcement amplifies our responsibility and commitment to use Commonwealth sport to build peaceful, sustainable and prosperous communities globally."

The ICSS is an international, not-for-profit organisation based in Doha and was established in 2010 with a self-appointed mission to promote and protect the integrity and security of sport.

“The mounting and complex challenges to the integrity of sport are more apparent than ever," Mohammed Hanzab, founder and President of ICSS, said.

“This new collaboration with the Commonwealth Games Federation is an important milestone for ICSS EUROPE and we acknowledge and fully support the vital role that the CGF plays in developing sport across the Commonwealth.

“On behalf of the ICSS, I would like to thank the Commonwealth Games Federation for its commitment to safeguarding sport and look forward to advancing efforts with them to address the very real challenges sport now faces to its integrity and credibility.”