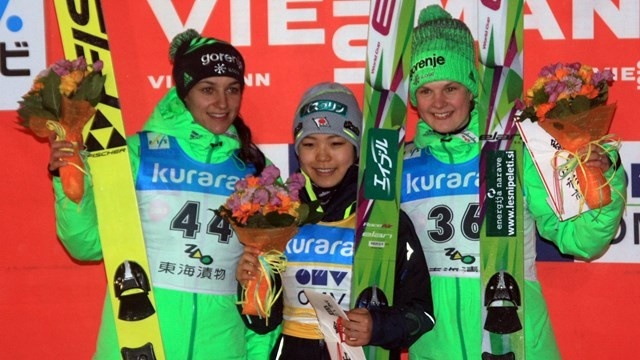 Slovenia’s Maja Vtic was not far away from Takanashi’s tally as she clinched the silver medal thanks to posting efforts of 94.5m and 97.5m, giving her a score of 238.7 points.

Vtic’s compatriot Ema Klinec was third with 236.7 points, achieved by virtue of jumping 93.5m and 98.0m, to ensure two Slovenian women claimed podium places for the first time in the short history of the World Cup.

Austria’s Eva Pinkelnig finished fourth for the second consecutive competition as jumps of 92.5m and 97.0m helped her to an overall score of 228.9 points.

The day, however, again belonged to the formidable Japanese star, whose performance handed her a sixth victory of the season.

The result extends her commanding advantage at the top of the overall leaderboard as she now has 680 points, 242 ahead of nearest challenger, Austria's Daniela Iraschko-Stolz, the Olympic silver medallist at Sochi 2014 who could only manage sixth place today.

“I am so overwhelmed,” Takanashi said.

“This result is a big success for me.

“Although I am not perfectly satisfied with the second jump, because I couldn't do a telemark.”

The men's Ski Jumping World Cup in Zakopane in Poland got underway with a commanding triumph for reigning world champions Norway in the team competition.

The quartet of Anders Fannemel, Andreas Stjernen, Daniel Andre Tande and Kenneth Gangnes picked up their first win in the Polish resort as they recorded a combined score of 1122.4 points.

Fannemel, the current world record holder, was the star performer for the Norwegian team as he posted the furthest jump of the event when he leapt 138m.

The event in Zakopane is due to conclude tomorrow with the individual competition.

The women's World Cup season, meanwhile, is scheduled to continue in Oberstdorf in Germany on January 30 and 31.