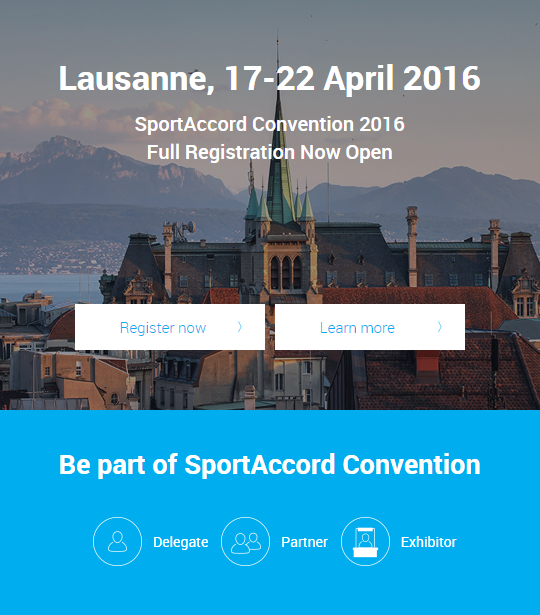 Delegate and exhibition registration for the 2016 SportAccord Convention in Lausanne is now open online.

The 14th annual edition of the event is set to take place from April 17 to 22 at the SwissTech Convention Center, which officials claim offers state-of-the-art exhibition facilities.

A discounted accreditation rate is being offered to delegates booking their places early via the Sport Accord Convention website.

The Convention will host a three-day exhibition as part of the official programme, represented by industries, sport organisations, Government offices, cities, event services and media.

"We’re expecting a great deal of interest for the exhibition and received a lot of interest as soon as the City of Lausanne was announced," said Brandon Kelley, SportAccord Convention’s sales manager.

"At the 14th edition of the Convention, our valued partners and delegates will see and experience enhanced service offerings with a focus on information sharing across various channels, including the new exhibitor and delegate 'PLUS' packages.

"This year, we’ve placed the SportAccord Convention café at the heart of the exhibition, a natural crowd-drawer, offering organisations the opportunity and platform to engage with delegates face-to-face and conduct business meetings over the three days of the exhibition.

"Our exhibition has become a coveted part of the Convention as many organisations from both sport and industry see the opportunities it brings.

"With over 35 per cent of exhibition space already sold, we don’t want to disappoint and urge organisations to make their arrangements early to guarantee their space."

Held in a different city every year, SportAccord Convention is a unique opportunity for key decision-makers from sport and industry to meet, network, and strategically shape global, regional and national agendas, organisers claim.

A six-day event comprising of up to 2,000 delegates, the Convention plays host to annual general meetings of governing bodies, and welcomes a delegation from the International Olympic Committee (IOC).

It will once again comprise a themed conference including City Forum, LawAccord and MediaAccord, as well as a plenary conference.

A Sports Demo Zone as well as social and cultural programmes also form part of the Convention.

Lausanne, the Olympic capital, will become the first city to stage it twice having previously done so in 2004.

The Swiss city was confirmed as host last month, ending an eight-month search for a city to stage the event.

Sochi withdrew from a contract to host the next five editions after former SportAccord President Marius Vizer publicly criticised IOC President Thomas Bach, which prompted several Federations to resign from the umbrella organisation.

Dubai was lined-up, but withdrew on the eve of signing a contract.