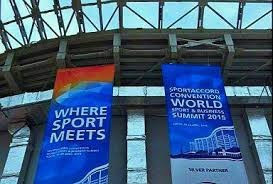 SportAccord Convention today launched the search to find hosts for 2017 and 2018 just two days after announcing Lausanne as the venue for next year's event.

Held in a different city every year, the annual SportAccord Convention is a unique opportunity for key decision-makers from sport and industry to meet, network, and strategically shape global, regional and national agendas, organisers claim.

Lausanne will be the first city to stage it twice when it hosts the 2016 edition, having previously had it in 2004.

“The SportAccord Convention is an important event in the sporting calendar for industry, International Sport Federations and organisations worldwide, so the earlier we start the bid process for the involvement of future cities, the better," said Nis Hatt, managing director of SportAccord Convention.

"The Convention provides an ideal platform to get business done - much is achieved in a short space of time - and for many organisations, the same opportunities may not present themselves as easily throughout the year.

“We are inviting cities to apply to become a host city in 2017 or 2018, and take advantage of the opportunities gained by being involved in this unique event."

Cities have until January 28, 2016, to register their interest.