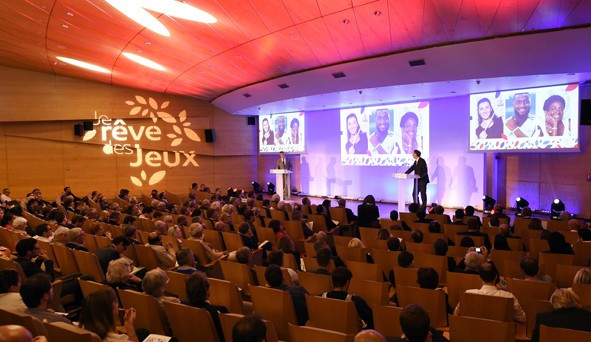 A crowdfunding scheme launched to help raise funds for Paris' bid to host the 2024 Olympics and Paralympics has raised just six per cent towards its target of  €10 million (£7 million/$11 million), it has been revealed.

“Je rêve des Jeux” - which translates as “I dream of the Games” - was an opportunity for French supporters of the bid "to engage" claimed Denis Masseglia, President of the French National Olympic and Sports Committee (CNOSF) at the star-studded launch attended by eight-time judo world champion Teddy Riner and Juventus footballer Paul Pogba.

"We know that it is important that we feel the momentum of a nation," added Masseglia.

Several methods for the French public to contribute towards the funding of the bid was launched, including the sale of wristbands.

There are currently less than 350 names on the digital wall.

An online auction has also failed to capture the imagination of the French public, it would appear.

Several items are listed but only two have so far received bids of more than €100, including a judo suit donated by Gévrise Emane, the triple world champion and London 2012 Olympic bronze medallist.

Organisers must raise the remaining amount.

Masseglia claimed today that the target to reach the goal of €10 million (£7 million/$11 million) was always in 2017, even though the campaign is due to officially end on December 31.

"Many people say, 'Yes, yes, I will participate', and then for a variety of reasons do not do it immediately," he said.

With the French Government unlikely to contribute more money towards the bid, one way to make up the shortfall currently being investigated is to raise the membership fees of the country's sports Federations with the balance being donated to Paris 2024.

"Everything is possible," said Masseglia.

"When we had a debate on the fact of putting, for example, one euro per licence [membership fee], some Federations said 'yes', others were against it.

"We must participate [in the bid] financially."

French Sports Minister has admitted he is concerned at the lack of public support.

He called it a "serious problem".

In September, Los Angeles 2024 raised its designated $35 million (£23 million/€31 million) budget in the space of a week after its chairman Casey Wasserman appealed to local business leaders.