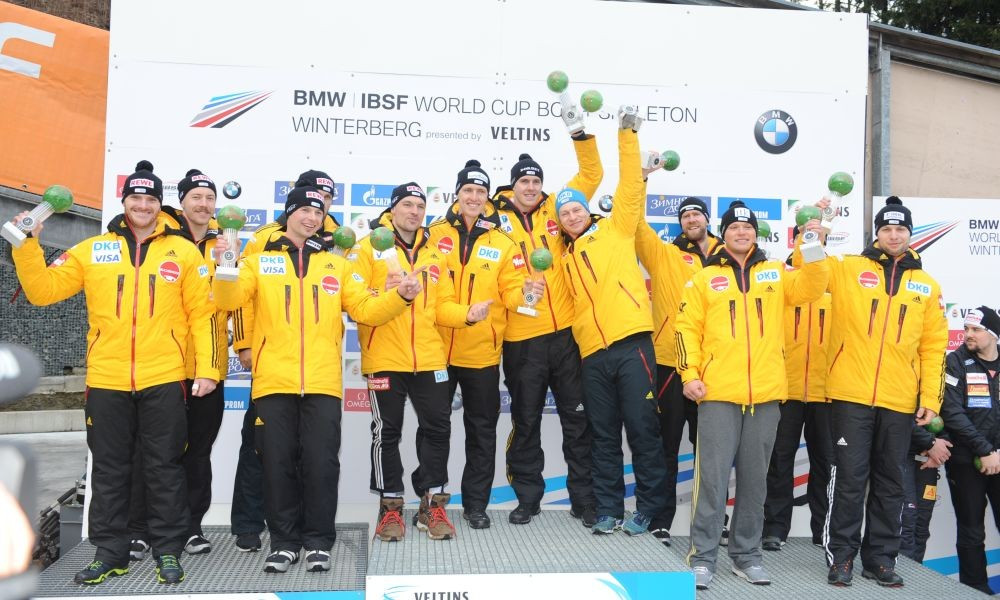 Friedrich had claimed two-man gold with brakeman Thorsten Margis yesterday and the duo joined pushers Jannis Bäcker and Martin Putze to earn a narrow victory over their compatriots.

The quartet were lying third after the day’s opening run, 0.07 seconds  behind the 2015 world champion pilot Maximilian Arndt and his team of Kevin Kuske, Kevin Korona and Ben Heber, who finished in 55.28sec.

They responded to the challenge in stunning style by posting the fastest time of the event, stopping the clock in 55.23, to post a combined total of 1min 50.58sec.

As a result, the pressure was placed on Arndt’s team for their final run and they proved unable to hold onto their lead, ending the event a narrow 0.05 behind their fellow Germans.

“Pretty much everything is right for us at the moment,” said Friedrich, who has piloted his two and four-man teams to gold in the opening two World Cups of the season.

“The conditions were good today, but we were pretty slow.

“I’m not used to driving down the track at that speed.”

The Swiss quartet of pilot Rico Peter, Thomas Amrhein, Simon Friedli and Janne Bror van der Zijde had looked on course to prevent another German clean sweep after they had held second position after the opening run.

Their challenge faded after their effort of 55.46 was only the seventh fastest of the second run times, giving them a total of 1:50.75.

They finished just 0.01 off the podium, with the third German team of pilot Nico Walther, Marko Hübenbecker, Christian Poser and Philipp Wobeto edged ahead to win bronze.

Back-to-back victories have moved Friedrich’s team onto a total of 450 points in the overall World Cup standings, with Arndt and Walther’s lying joint second on 410.

The next World Cup is due to be begin in Königssee, Germany, on Friday (December 11).