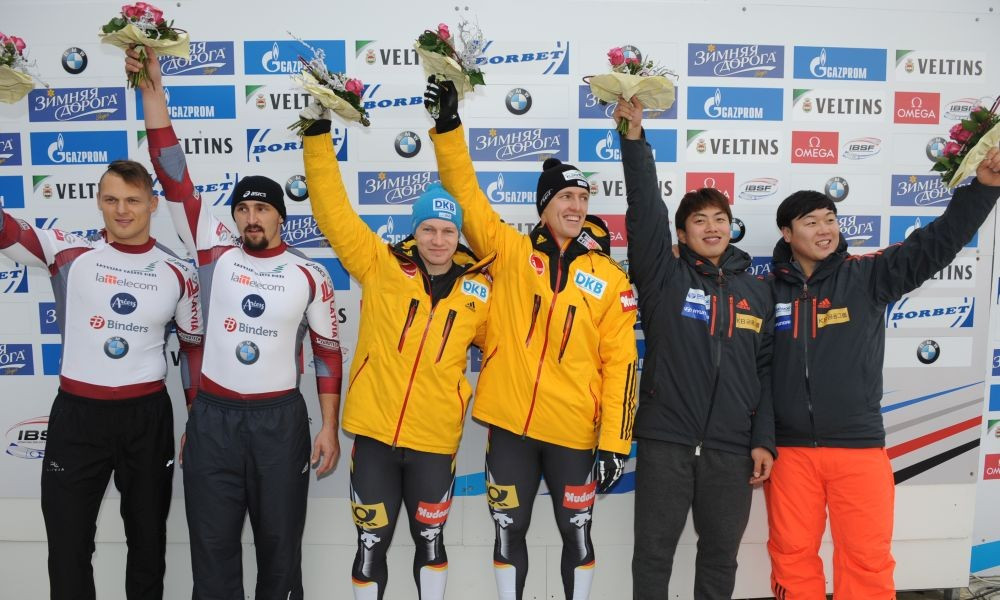 World champions Francesco Friedrich and Thorsten Margis continued their stunning start to the International Bobsleigh and Skeleton Federation (IBSF) World Cup after triumphing in the two-man bobsleigh event in Winterberg.

The German duo, competing in front of a home crowd, began with a start time of 5.05sec to shave 0.03 seconds off the seven-year-old track record held by Switzerland’s Thomas Lamparter and Beat Hefti.

It put them on course for a superb opening run and with Friedrich piloting superbly around the course they produced a track record of 55.02, giving them a buffer of 0.17 over last season’s World Cup winners Oskars Melbardis and Daumants Dreikens of Latvia.

Despite the Latvians producing the fastest second run, clocking 55.31, they were unable to close on the world and European champions,  who finished 0.13 clear of their rivals with a combined time of 1min 50.37sec.

“We finally managed to achieve what we set out to do, setting a new starting record,” Friedrich said.

“A good start meant twice as much today seeing as our second run in particular, didn’t go so well.”

With an identical podium to the opening event in Altenberg, the overall standings remain unchanged with Friedrich and Margis moving onto 450 points, while the Latvian and South Korean teams lie on 420 and 400 points respectively.

Their opening run of 56.74 gave the duo a 0.18 lead over the world champions Meyers Taylor and Jones and a solid performance in their second time down the Winterberg track saw them finish in 1:53.74.

It proved enough for the Olympic bronze medallists to finish clear of Meyers Taylor and Jones after they ended 0.15 adrift of the winners, despite producing the fastest second run.

Reigning Olympic champions Kaillie Humphries and Melissa Lotholz had to settle for bronze after finishing in 1:54.09.

They now share the overall World Cup lead with Poser and Garrett on 425 points, while Belgium’s Elfje Willemsen and Sophie Vercruyssen are third on 386.

The Winterberg World Cup is due to conclude with the four-man bobsleigh event tomorrow.