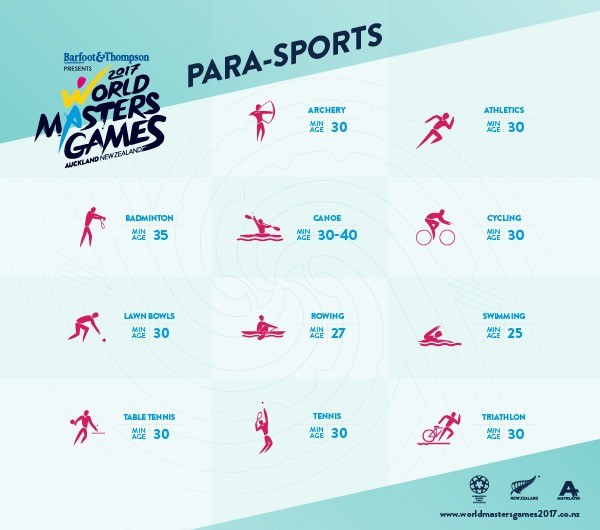 The 2017 edition of the World Masters Games will feature the biggest ever Para-sport programme in the history of the event, it has been announced.

The precise age divisions and format for many of the Para-sports is currently being finalised and will be announced next week when the full schedule is unveiled.

With tomorrow serving as the United Nation’s International Day of Persons with Disabilities, it is seen as the perfect time to announce the increased Para-sport schedule.

Jennah Wootten, chief executive of World Masters Games 2017, said: "This year’s theme for the International Day of Persons with Disabilities is 'inclusion matters' which resonates very strongly with the ethos and philosophy of ‘sport for all’ which is at the very heart of the World Masters Games Movement.”

As with the Paralympics, all of the Para-sport options will have a classification system in place to ensure fair competition.

This will be developed with Paralympics New Zealand, who will represent the International Paralympic Committee, a key partner of the World Masters Games.

Fiona Allan, chief executive of Paralympics New Zealand, said: "There is no doubt Para-sport has seen a huge growth in terms of public interest and competing athletes since the London 2012 Paralympic Games.

"With only 278 days to go until the Rio 2016 Paralympic Games we hope the performances of Kiwi Paralympians on the world stage will both inspire potential athletes and engage supporters even further as we head towards the World Masters Games 2017, just six months later.

"We look forward to continuing our great work with the local organising committee of World Masters Games 2017 to both promote the Para-sport events and provide fair and equitable competition for all athletes involved.”

The Masters Games is an open competition - with athletes competing for themselves and not under the flag of their country.

For most sports you have to be over the age of 35 - although some sports allow younger.

In the past, competitors have taken part over the age of 100.

It will be the largest event New Zealand has hosted since the Rugby World Cup in 2011 and will be the biggest the country will see in the next decade.

The 2013 Games were hosted in Turin, while this year a second Winter Masters Games was held in Quebec City.