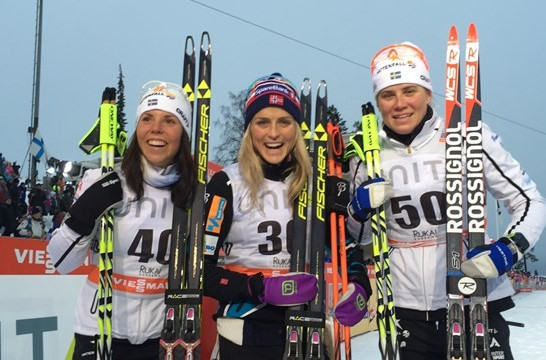 Johaug, a seven-time world champion who also won an Olympic relay gold at Vancouver 2010, finished in 11min 23.8sec in the free technique interval start format today in the Finnish resort.

This put her 17.6 seconds clear of Swedish rival Charlotte Kalla, with Kalla's compatriot Ida Ingemarsdotter a further eight seconds back in third.

Johaug's victory means she leads the three-stage mini tour by the slenderest of 0.4 second margins from team-mate Ingvild Flugstad Oestberg ahead of tomorrow's finale.

"It was a really good race from me," she admitted afterwards.

"A 5km skate was not my distance before.

"I have been working many years on improving my speed and technique.

"I also did a lot of strength training, and it is fun to see it pay off in competitions."

In the men's event, Sundby gained his fifth successive World Cup victory over the 10km distance, finishing 11.2 seconds ahead of Alex Harvey of Canada.

Sundby also moved into the overall Tour lead ahead of tomorrow's 15km classic pursuit finale, 13.8 seconds ahead of his team-mate Finn Hagen Krogh

"I have a good start position for tomorrow," he said.

"It will be a new experience to start first in the last stage.

"I have to mentally prepare for that.