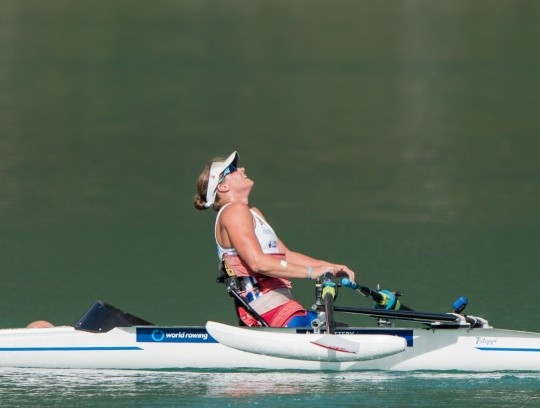 Competing in tricky weather conditions at the national training centre near Reading, the arms-only single sculler, runner-up at this year’s World Championships in Aiguebelette, France, came home in a time organisers claimed equated to 94.9 per cent of the predicted Rio 2016 gold medal mark.

"She probably had the worst of the conditions, too."

Morris transferred from hand-cycling to rowing as recently as 2013, having won Paralympic gold at Beijing 2008 in her previous sport.

Today she topped a list which saw Laurence Whiteley, a world silver medallist in the trunk and arms double scull, come in second at 92.6 per cent of the predicted Paralympic gold standard.

His double scull partner, Lauren Rowles, still only 17 and a recent convert from wheelchair track racing, was fourth.

Grace Clough and Pamela Relph, reigning world champions in the mixed coxed four, teamed up in a women’s pair and put in a strong performance to take third slot in the standings.

"That was one of the strongest LTA (legs, trunks and arms category) performances we have ever seen from a women’s pair," said Dyson.

"They were very quick."

The conditions meant that the assessment was shortened from the originally planned two kilometre time trial to a 1km course, with coaches deciding not to release the times.

Six of Great Britain’s top contenders were unable to trial because of illness in the squad earlier this week.

The trials marked the first step in a winter of testing aimed at selecting the Rio 2016 team.

Britain qualified four boats for next year's Paralympic Games at the World Championships; the mixed coxed four, the trunk and arms double scull, and both of the arms and shoulders single sculls.