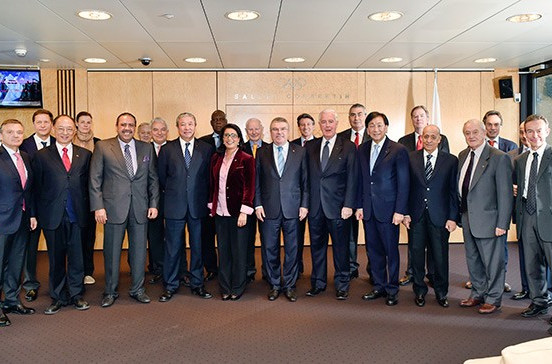 A new independent body to oversee and eventually carry out anti-doping testing at major sporting events is being considered following an Olympic Summit in Lausanne, while a "strong signal" warning sports organisers not to discriminate against athletes from a particular country was also given.

Plans for the anti-doping body, which would take responsibility away from organising committees and International Federations, remains at a preliminary stage at the moment, but a Working Group has been set-up chaired by World Anti-Doping Agency (WADA) President Sir Craig Reedie to explore the idea further.

Avoiding any conflict of interest by taking responsibility away from those with any perceived vested interest against catching cheats is at the heart of the decision, insidethegames understands.

As well as anti-doping experts, representatives of international Governments which provide WADA with funding are also expected to be involved, along with figures from the sports world.

As a bare minimum, the body would oversee drug testing programmes in conjunction with existing bodies, but it is hoped it could also eventually faciliate a testing system itself.

This would require extensive study, including discussion on how such a body would be financed.

International Federations would remain responsible for suspensions and bans handed out, but the Summit participants were keen to remove any power for national governing bodies to do this, the system currently employed in athletics.

This also included Britain's new International Association of Athletics Federations (IAAF) head Sebastian Coe, who pledged an independent body as a key part of his election manifesto ahead of his victory over Ukraine's Sergey Bubka at August's Congress in Beijing.

Coe provided a presentation during the meeting, with a larger-scale version of his plans considered the basic blueprint for the body.

Doping has been a particular problem in athletics in recent years, with WADA currently continuing its investigation into allegations of "systematic" problems within Russian athletics.

Doping was one of four major issues discussed during the meeting, which focused upon high-level "strategic" matters related to the Olympic Agenda 2020 reform process and the proposed Olympic TV Channel.

A "clear message" warning against discriminating against athletes from particular countries was another firm resolution, following several cases of athletes - particularly from Israel or Kosovo - experiencing difficulties.

Any persecution will result in a tournament being stripped of recognition as a "proper event", such as one where Olympic qualifying points are available.

Offences would not be limited just to athletes being banned, but could also involve more limited actions such as a country's flag not being displayed, as happened with Israel at last year's World Baseball Softball Confederation Congress in Hammamet, Tunisia.

Problems have also been experienced in other Arab countries, with a Qatari television broadcast of an International Swimming Federation World Cup meet in 2013 showing the Israeli flag being obscured in the aftermath of Amit Ivry winning a silver medal.

Negotiations have had to take place with several organisers to allow athletes from Kosovo to compete at events this year, with several countries, including Serbia, Russia and Brazil, still not recognising the Balkan Republic.

“This fourth Olympic Summit shows the unity of the Olympic Movement behind the Olympic Agenda 2020 reforms," said Bach following the meeting.

"We cannot overstate the importance of good governance, which leads to credibility.

"With regard to the credibility of sport and the protection of clean athletes, the Summit has taken a major step forward to making anti-doping testing independent from sports organisations.”

More specific issues, such as problems within FIFA and new sports proposed for inclusion at the Tokyo 2020 Olympic Games, were not on the agenda, insidethegames has been told.

Another Olympic Summit is expected to be held next year, probably at some point after the Games in Rio de Janeiro, which is due to take place between August 5 and 21.