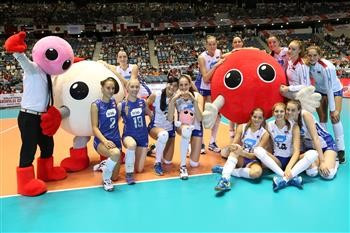 Russia overcame Kenya in straight sets to preserve their unblemished record at the International Volleyball Federation (FIVB) Women's World Cup in Japan, while China tasted defeat for the first time at the hands of the United States.

The Russians had difficulties in closing out the third set in their match in Tokyo but ultimately prevailed as 25-16, 25-21, 25-21 winners with Tatiana Kosheleva scoring 16 points in the match.

China’s Zhu Ting top scored with 17 points, but the US had a more even spread of support on that front with Karsta Lowe, Kimberly Hill and Foluke Akinradewo finishing on 16, 14 and 11 points respectively.

Argentina briefly threatened a come-back after falling 2-0 behind against the Dominican Republic in Tokyo but, having taken the third set, they went on to lose the fourth as the score ended 25-21, 25-22, 19-25, 25-15.

The other match in the Japanese capital saw the host country cruise to a 25-15, 25-12, 25-16 victory over Cuba with Sarina Koga and Miyu Nagaoka scoring 19 and 14 points respectively.

Stefana Veljkovic and Jelena Nikolic combined for 26 points; more than half of Peru’s total output.

A total of six teams - Japan, the US, South Korea, China, the Dominican Republic and Serbia - have two wins to their name, while Argentina, Peru and Cuba all have one.

The action in Japan is due to continue on Wednesday (August 26) following a rest day tomorrow.

Russia will put their undefeated record on the line against Argentina in Tokyo, while China will be looking to get back to winning ways as they face South Korea in Matsumoto.

The other matches in Tokyo see Cuba play the Dominican Republic and Japan meet Kenya, while in Matsumoto, the US go up against Peru and Serbia encounter Algeria.