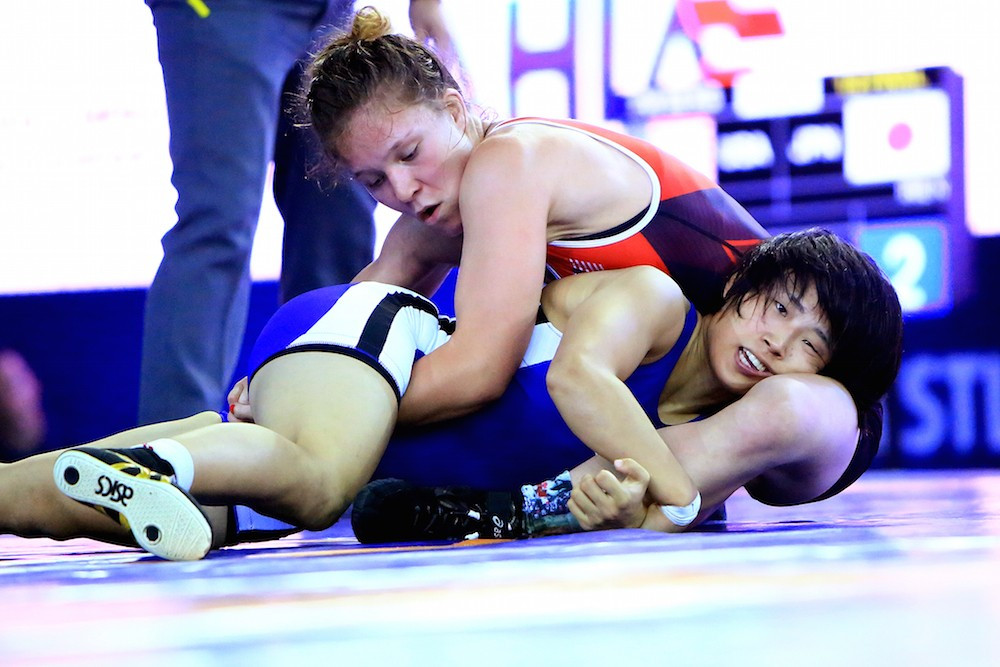 Having lost two of their three finals yesterday, the Japanese side earned a trio of titles on day two with Miho Igarishi triumphing in the 48 kilogram category, before Nanami Irie and Rino Abe took the respective under 55kg and 72kg crowns.

Japan finished the tournament with 66 points, followed by Azerbaijan who finished level on 47 points with Russia but claimed second by virtue of their superior gold medal tally - two to one.

In a topsy-turvy final, Igarishi bested Kazakhstan’s Irina Borissova 16-12 to set the tone.

Undeterred, the youngster fought back and after exchanging several points took an 8-7 lead into the break.

The second period saw the duo exchange technically impressive four-point throws, a handful of takedowns and spirited defences to leg attacks, but it was Igarishi who ultimately prevailed from the highest-scoring match of the Championships.

Irie, the 2014 Junior World Championships bronze medallist, followed at 55kg with a convincing performance, scoring two takedowns in the first minute before pinning Hungary’s Ramona Galambos to secure a 7-0 win.

Kazakhstan’s Marina Sedneva won one of the two 55kg bronze medal matches against the Dominican Republic’s Yocleidy Ramirez and was joined on the third step of the podium by the US’s Becka Leathers, who beat Italy’s Patrizia Liuzzi.

Japan finished off their golden night through Abe who had a much tougher road to success than her fellow countrywomen, facing Azerbaijan's Sabira Aliyeva in the finals.

Aliyeva powered to a 4-0 lead and appeared dominant for the first 90 seconds, but Abe didn’t break and rattled off 12 unanswered points using an array of underhook attacks and overhook slips to take the under 72kg title, 12-4.

The bronze medals were won by Norway’s Iselin Maria Moen, who defeated the US’s Rachel Watters, and Kazakhstan’s Gulmaral Yerkebayeva, up against Ukraine’s Anastasia Shutova.

In the 63kg final, the 2014 European junior champion Liubov Ovcharova earned Russia their first title of the women’s competition, repeating her continental conquest over Azerbaijan’s Ragneta Gurbanzade, this time by technical fall, 10-0.

Canada’s Braxton Stone-Papadopoulos got her hands on a bronze medal by overcoming the US’s Mallory Velte, while Sweden’s Therese Persson beat Hungary’s Eliana Szabo to the other.