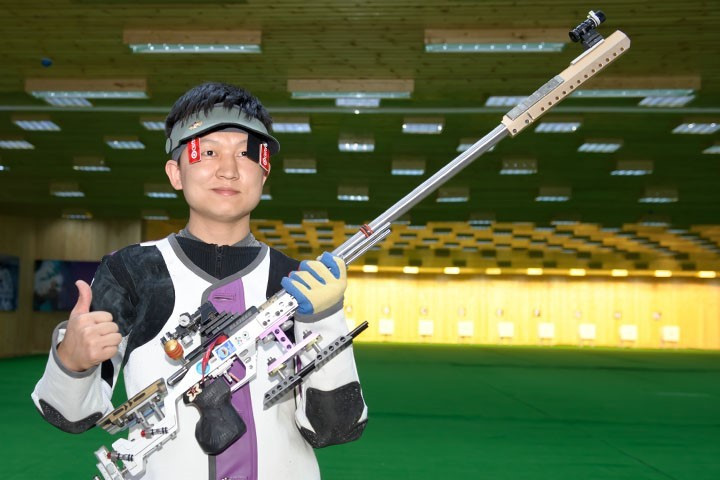 China claimed gold and bronze medals in the men’s 50 metre rifle three positions event to preserve their place at the summit of the standings at the International Shooting Sport Federation (ISSF) World Cup in Gabala.

The 26-year-old started-off the medal-match with one of the lowest kneeling position scores among the finalists, 150.0 points, but then climbed up through the prone position with 306.0 points, before an impressive performance in the standing series saw him pocket the gold with 459.8 points.

"This is the result of long trainings," said Hui

"Gabala's has been a great competition, I feel really good now.

"I am just trying to be myself through the competition, and to do my best.

"I am also a bit lucky, which helps.

"I will keep on fighting to stay on top."

Zhu, the reigning world champion, was in the lead right until the second-last shot when he fired a frustrating 7.0 to close the match in third with 446.8 points.

Schmirl took advantage of Zhu's mistake, moving up to second place, with 457.9 points.

Russia’s Fedor Vlasov won the first Rio 2016 quota up for grabs, finishing in fifth with 426.7 points, while India's first-time finalist Chain Singh claimed the second, finishing in eighth with 403.7 points.

Elsewhere on the penultimate day of action, Serbia's Zorana Arunovic bagged another gold in Azerbaijan following her victory at the Baku 2015 European Games in June.

Arunovic shot consistently through the women’s 10m air pistol final, climbing the scoreboard to post a winning score of 199.0 points.

Arunovic's success was bitter-sweet though as the two-time London 2012 finalist didn’t manage to secure an Olympic quota having finished 48th in the women’s 25m pistol event on Monday (August 10).

"I was really disappointed with my results in the 25m pistol event," she said.

The Olympic quotas for the women’s 10m air pistol event went to Russia’s Olga Kousnetsova, the 1996 Olympic champion, who took fourth place with 156.0 points, as well as France's Celine Goberville, seventh with 96.6 points, and Thailand’s Klaisuban Pim On, who placed 11th with 382 points in the qualifications.

As for the women’s trap final, Japan's Yukie Nakayama won gold and also secured an Olympic quota for her country.

Nakayama hit 14 out of her 15 targets in the final against Taiwan’s Lin Yi Chun, the silver medallist who secured the event's other Olympic quota.

The action in Gabala continues tomorrow with the men's trap final closing the World Cup stage.