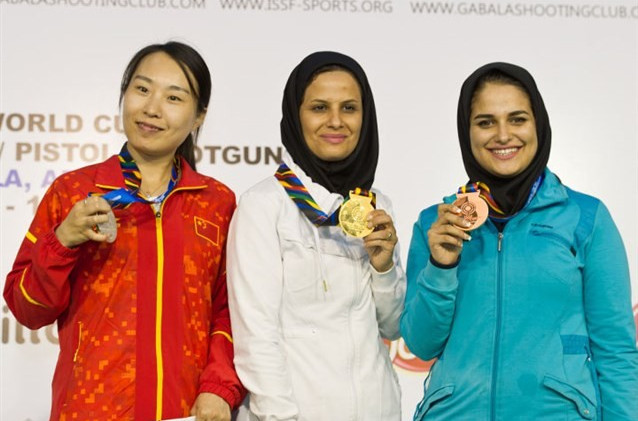 The 33-year old, three-times an Asian Games silver medallist, posted a total of 207.8 points to seal a narrow victory over China's Zhang Binbin by a slender 0.4 point margin.

Ahmadi’s team-mate Najmeh Khedmati, gold medallist in the event at the recent Universiade in Gwangju, rounded off the podium, taking home bronze with 185.5 points.

The result also saw her clinch another Rio 2016 quota berth for Iran, while the other available place went to Russia’s Anna Zhukova by virtue of her fourth-place finish.

Ahmadi began the final in ominous fashion, recording a score of 31.6 after the first round to send her to the top of the leaderboard.

She endured a difficult period after that and at one point found herself struggling down in fourth place as Zhang led the way.

The Iranian shooter, however, managed to recover and retook the lead once her compatriot Khedmati had exited the competition with a score of 10.6 to move ahead of Zhang.

She then kept her nerve in the final shot, extending her advantage by 0.1 to seal a superb win.

In the men’s event, China’s Cao Yifei topped the podium at an ISSF World Cup event for the first time in five years, producing a commanding display to claim gold.

Cao, ranked ninth in the world, went in front halfway through the final and never relinquished his grip on the title, eventually finishing with a total of 207.4 points.

That haul was enough to edge South Korea's Kim Sang Do by 0.5 points, with Peter Gorsa of Croatia securing the bronze medal, along with an Olympic quota place, in only his second ISSF World Cup finals appearance of his career.

The victorious 28-year-old Chinese shooter now harbours ambitions of being part of the Chinese team at the Rio 2016 Games, hoping that his performance in Gabala will help him get selected.

“I am really honoured to be the winner of today's final,” Cao said.

“I hope today's result will help me to make it into the Chinese Olympic team for Rio 2016.”

The other two Rio 2016 quota spots went to Illia Chareika of Belarus and Hungary’s Istvan Peni.

The event in Gabala, the last World Cup of the season, is due to continue tomorrow with the men's double trap and 50m pistol finals as well as the women's 25m pistol final.