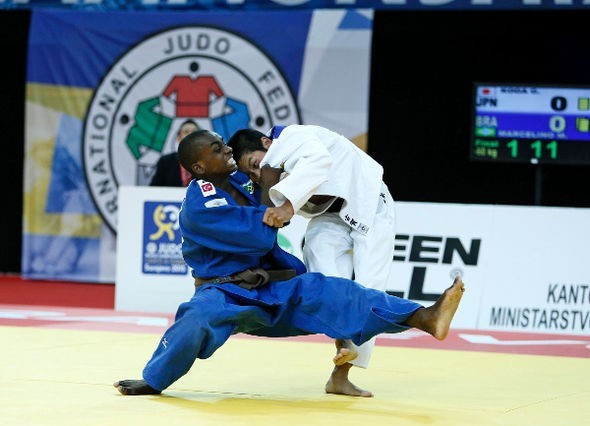 Japan’s Genki Koga lived up to his family name at the International Judo Federation (IJF) Cadet World Championships as the son of the Barcelona 1992 Olympic champion Toshihiko earned gold in the under 60 kilogram division in Sarajevo.

With the wisdom of his father, a three-time world champion, ringing in his ears Genki Koga immediately began the final on the attack against his 16-year-old Brazilian opponent Michael Marcelino in the Olympic Hall Juan Antonio Samaranch in the in the Bosnia and Herzegovina capital.

Koga saw his attacks consistently thwarted by Marcelino but, despite his frustration,  was able to take victory after his opponent had one more shido penalty at the end of a scoreless contest.

“I felt a lot of pleasure but it is a very special feeling to win gold at this event,” Koga said.

“I have only fought abroad three times and even today I felt very nervous before the competition started.

“My dad said it is my first world competition and for me to be positive, not to be afraid of my opponent, to attack and not to be too nervous.

“I have many goals and the biggest one is to be Olympic champion at Tokyo 2020.”

Georgia’s Robinzon Belarashvili, winner of the gold medal in front of his home crowd at the European Youth Olympic Festival (EYOF) in Tbilisi a week ago, was forced to settle for bronze on this occasion as he defeated Azerbaijan’s Mahammad Hajiyev in ten seconds.

The second bronze medal in the division was secured by Russia’s Akhmed Bogatyrev following a waza-ari in the final two minutes to earn victory over Tajikistan’s Jamoliddin Abdulloev.

Japan proved to be the most successful country on the second day of competition as Kana Tomizawa earned the world title in the women’s under 52kg division, beating Croatia’s Tihea Topolvec with an ippon in the first 45 seconds of their gold medal bout.

The final girl’s gold of the day was awarded to Uzbekistan’s Diyora Keldiyoorova after she defeated The Netherlands’ Jorien Visser in the 48kg division in the final seconds of the encounter with an ippon.

The men’s under 66kg title was won by Italy’s Giovanni Esposito, the newly crowned EYOF champion, earning victory from the jaws of defeat with a match-winning ippon in the final 10 seconds to defeat Georgia’s Bagrati Niniashvili, having trailed to a waza-ari.