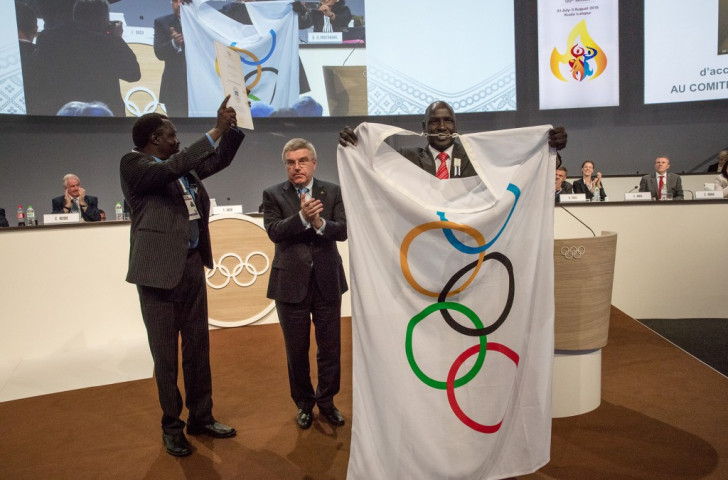 South Sudan has been rubber-stamped as the 206th member of the International Olympic Committee (IOC) here today, with plans already in place to send a four-strong team to Rio 2016.

The news, coming less than two months after an historic first meeting of the South Sudan National Olympic Committee (SSNOC) in Juba, follows the IOC's Executive Board's recommendation that the world's newest nation be included as a full member last week.

Following a presentation by IOC director for NOC Relations Pere Miro, that decision was unanimously enforced by acclamation this afternoon on the third day of the IOC Session here.

"Over the past few months, my country has undergone armed conflict, and we firmly believe this is going to be a milestone and a great vehicle for promoting peace-building," said Kuoirot.

"It will also give great hope and inspiration to the youth of our country."

South Sudan, which split from its northern neighbour Sudan in 2011, becomes the 206th member of the IOC just seven months after Kosovo was approved as the 205th.

Yet, while the recognition of the Balkan Republic was a deeply political issue due to the large number of countries that do not recognise its independence, the challenge for South Sudan had been having five National Federations recognised by the respected international body, a requirement for membership in the Olympic Charter.

Seven such recognitions have now been given, it was confirmed, with others set to follow soon.

Kuoirot revealed they hope to send a four-strong athletics team to Rio 2016, consisting of two men and two women, including marathon runner Guor Marial, 47th at London 2012 after competing as an independent athlete under the IOC flag.

While the nation has enjoyed regional success in other sports, such as handball, it is not thought they will compete in events beyond athletics next year in Rio de Janeiro.

Recognition is a rare piece of good news for a nation locked in the midst of a domestic conflict which has forced more than two million people from their homes, including 730,000 to neighbouring countries.

"Despite the political difficulties between Sudan and South Sudan, you worked together with your neighbours and have made this recognition possible," said Bach.

"Sports builds bridges...we will stand by your sides, we will assist in your development as much as we can."

Officials from Sudan were repeatedly praised for their support throughout the process, hailed as an example of sport being used to build bridges despite political problems.