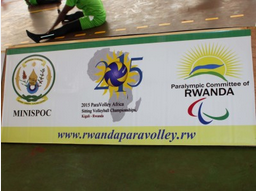 Egypt condemned hosts Rwanda to their first defeat of the men's ParaVolley Africa Sitting Volleyball Championships, coming out comfortable 3-0 winners on day three of the event in Kigali.

Victory for Egypt maintains their 100 per cent record without dropping a set and puts them top of the group table alongside Kenya, 3-0 winners against Burundi.

The other men’s encounter saw Algeria get themselves off the mark with a 3-0 success against the winless Democratic Republic of Congo.

Egypt are now the outright leaders in the women’s competition thanks to a combination of their 3-0 triumph against the Democratic Republic of Congo and Rwanda’s first loss, 3-2 at the hands of Kenya.

Burundi beat Uganda 3-1 to pick up their first victory, but they still have one win less than Rwanda and Kenya after three matches.

Tomorrow’s men’s action is due to see Burundi play the Democratic Republic of Congo before Egypt meet Algeria, and Kenya face Rwanda.

As for the women, Egypt go up against Rwanda following the Democratic Republic of Congo’s clash with Uganda, and Burundi’s match against Kenya.

The Championships act as a qualifier for next year's Paralympic Games in Rio de Janeiro.

The winner of the men’s and women’s tournaments, due to end on Tuesday (July 28), will earn tickets to Brazil.