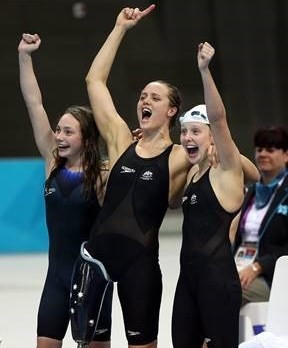 Speedo have signed a new deal with the Australian Paralympic Committee (APC) to become an official team supplier for the country's swimming team for Rio 2016, they announced today.

Australia finished seventh overall at the International Paralympic Committee Swimming World Championships, which concluded in Glasgow on Sunday (July 19), with a total of 30 medals, including nine gold.

Australia's most successful swimmer was Ellie Cole, winner of three gold medals in the S9 100 metres freestyle, S9 100m backstroke and as a member of the 4×100m freestyle relay 34 points.

They hope it will be a platform for next year's Paralympic Games as they aim to do even better than they did at London 2012, where they finished second on the medals table.

Then, they won 37 medals, including 18 gold, six of them won by Jacqueline Freney, who missed Glasgow to concentrate on her preparations for Rio 2016.

“With three world records broken and 30 medals won by our swimmers at the 2015 IPC Swimming World Championships, we’re confident that with Speedo’s world’s class swimwear and support, our Team will be able to keep improving and hopefully surpass all expectations in Rio.”

It will be the third consecutive Paralympic Games that Speedo have sponsored Australia's swimming team.

"Our Paralympians are truly inspiring swimmers and that’s what Speedo is all about.

"We love sharing our passion for the water and inspiring everyone, from babies all the way through to the elderly, to get in the water and enjoy the many physical and emotional benefits of swimming.”