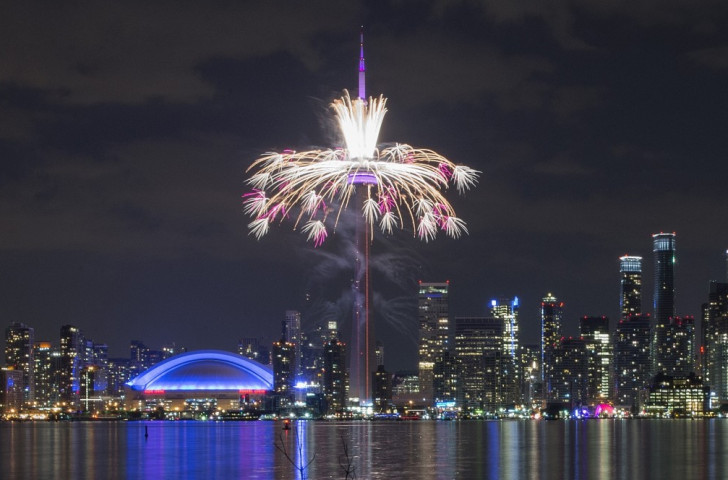 After a build-up clouded by some criticism of the Games from the local population, it will have come as a huge relief that tonight was immediately widely praised on social media as a strong advertisement for the host city and nation.

Tickets for the event were in hot demand, and 45,000 spectators were present here in the arena usually known as the Rogers Centre and home to the Toronto Blue Jays baseball team.

With the roof, the first retractable one on any stadium in the world, closed from the outset, there was a slightly more intimate and homely vibe to proceedings, different to the large athletic stadium feel of many other Ceremonies of recent times.

This spirit of uniqueness and innovation was present from the outset as, in what was billed as the first-time ever, the Torch was introduced to open the event, before burning throughout the show.

He then passed to Bailey, the Atlanta 1996 100m champion and former world-record holder, who base-jumped off the 553 metres-high structure.

In a stunt which conjured memories of The Queen and James Bond actor Daniel Craig at the opening of London 2012, Bailey descended from the ceiling of the live Ceremony itself, before a final exchange with 15-year-old diver Faith Zacharias.

It was always going to be hard to match these opening heights, but a vibrant Parade of Nations followed as, beginning with Argentina, all 41 member of the Pan American Sports Organization (PASO) made their entrance.

To the surprise of no-one, it was Canada, the final team to enter, which received the loudest cheer, as canoeist Mark Oldershaw led out a massive delegation aiming to finish in second place in the overall medals table.

Next came the Ceremony itself, as a sequence of impressive visual acts showcased the theme of “From Dream to Reality.”

The heritage of the host nation formed one central component, as well as a strong youth appeal illustrated through a sequence involving BMX cyclists performing simultaneously on a series of ramps.

These themes were encapsulated again in the subsequent speeches, as first Toronto 2015 chief executive Saäd Rafi outlined the strength of the region and how the dream of the Games had been realised, before rhythmic gymnast Alexandra Orlando, chair of the PASO Athletes' Commission, gave a glowing tribute to former PASO President Mario Vasquez Rana following his death earlier this year.

She thanked him for his lifelong contribution to Pan American sport and for his support of athletes, and then passed on to Vasquez-Rana replacement, Uruguay's Julio Maglione, who gave his thanks to all those who had made the Games possible.

After lengthy addresses in first English and then Spanish, it was left for Canadian Governor-General David Johnston to officially declare the Games open.

All that was left then was for the lighting of the Cauldron, which was performed elaborately in a homage to Canadian athletes of the past and present.

Payne-Wiggins then passed it on to her son, Andrew Wiggins, who plays for the  Minnesota Timberwolves in the National Basketball Association (NBA).

He in turn exchanged it with Steve Nash, surely the best known Canadian player in history who played in the NBA for Phoenix Suns, Dallas Mavericks and Los Angeles Lakers.

He travelled outside to the CN Tower Plaza to ignite a bowl before transferring the fire to an official Cauldron through a firework.

It was a spectacular end to a Ceremony which has provided a strong and inspiring start to these Games.