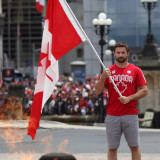 The 32-year-old was confirmed as the host country's flag carrier on Canada Day, held annually on July 1 to mark the establishment of the country in 1867, with Oldershaw revealed to a crowd of thousands by waving the flag on Parliament Hill in Ottawa.

Oldershaw is one of Canada’s most decorated canoe athletes, having won an Olympic bronze medal at London 2012 in the C1 1000 metres event and claimed several victories during the 2015 anoe Sprint World Cup season over the distance.

Toronto 2015 is set to be his first Pan American Games, due to be held from July 10 to 26, and he will now have the honour of leading a Canadian team of more than 700 athletes into the Opening Ceremony.

Oldershaw was the fifth member of his family to compete at the Olympics following his grandfather in Bert, who competed three Games, while his father Scott appeared at Los Angeles 1984,

Additionally, his uncle Dean took part in the Olympics at Munich 1972 and then Montreal 1976, where Reed Oldershaw, another uncle, also participated.

Mark Oldershaw was the first member of the family to win an Olympic medal, however.

“I will be thinking of all my team-mates and of my grandfather, father and uncles who paved the way for me with their love of sport,” he said of being named as the flag bearer.

Oldershaw is likely to be the flag bearer for one of the strongest Canadian teams in recent years as the Canadian Olympic Committee are targeting a second place finish on the medals table.

It follows a fifth place position at Guadalajara 2011 behind the United States, Cuba, Brazil and host nation Mexico.

While Oldershaw will be leading the team into the Opening Ceremony on July 10 at the Rogers Centre, which has been renamed as the Pan American Games Ceremonies venue for the duration of the event, it will also see the end of the 41-day Torch Relay which has been taking place nationwide throughout the country.

The Opening Ceremony is designed to showcase Canada, with world famous entertainment company Cirque du Soleil having produced and directed the Ceremony.

Related stories
June 2015: Double Olympic champion Bailey surprises family by delivering Toronto 2015 tickets to their front door
May 2015: Toronto 2015 Torch Relay launched with harbourfront ceremony
May 2015: Pan American Games Flame lit at Mexico's Pyramid of the Sun
May 2015: Pan Am Games Torch to arrive in Toronto on May 30 ahead of 41-day nationwide relay
May 2015: Carrington and Oldershaw make it two golds each at Canoe Sprint World Cup