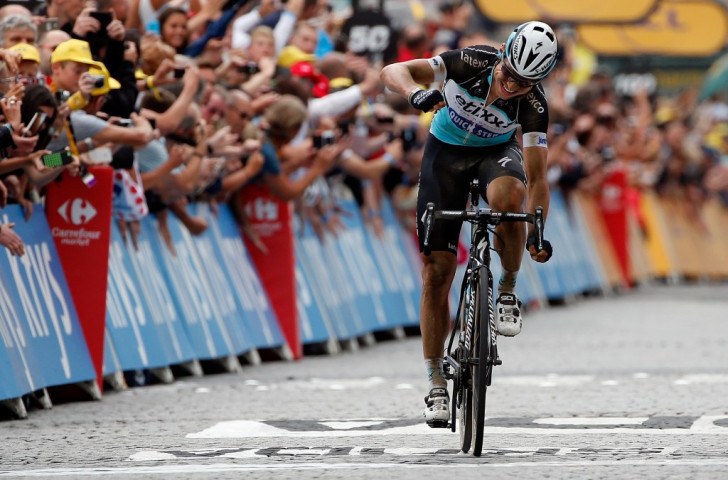 Martin, the Olympic silver medallist and three-time former world time trial champion, had narrowly missed out on the lead on each of the first three days.

But on today's mammoth 223.5 kilometres tester, the longest stage of this year's race and one which took the field into France for the first time, he finally excelled, navigating seven sections of cobbles before launching a solo burst with three kilometres remaining.

This was despite suffering a puncture with 20km left, meaning he switched onto team mate Matteo Trentin's bike rather than waste valuable seconds awaiting his team car to bring him a replacement.

"After having a flat tyre and changing bikes I was thinking about the next stage," he said afterwords.

"But I got back in [the lead group] and with five kilometres remaining everybody was looking round and not pulling so I went for it.

"A thousand thanks for my team, I am super happy."

This was enough for the 30-year-old to snatch the overall race lead from Britain's Chris Froome, although the 2013 champion will still be delighted after surviving a tricky stage and avoiding a setback of the kind which saw him crash out of last year's Tour on stage four.

Froome crossed the line in the peloton alongside rivals Alberto Contador of Spain, Vincenzo Nibali of Italy and Nairo Quintana of Colombia.

This means he leads Contador by 36 seconds, Nibali by one minute 38 seconds and Quintana by one minute 56 seconds and sits second behind Martin, who is unlikely to retain the overall lead once the race hits the mountains.