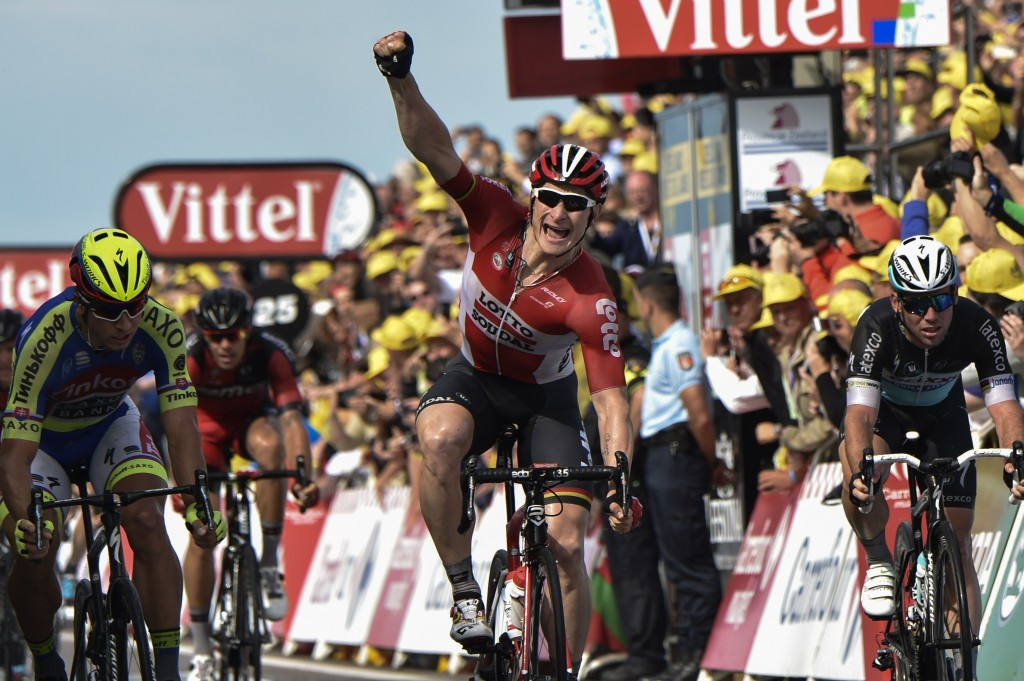 Germany's Andre Greipel claimed victory on the second stage of the Tour de France following a dramatic and weather affected race from Utrecht to Zeeland in The Netherlands which saw several general classification contenders lose time as Switzerland's Fabian Cancellara moved into the overall lead.

Owing to its extremely flat profile, the 166 kilometres stage had been earmarked for the sprinters rather than the general classification riders.

Due to the wet and windy conditions, however, Saxo Tinkoff, the team of Spain's Alberto Contador, set out to make early inroads into their rivals.

They joined forces with Etixx-Quick Step, riding for their British sprinter Mark Cavendish, to set a blistering pace as the race entered the final 50km.

Their combined efforts proved successful in creating several splits in the peloton due to the crosswinds, just as they had in the 2013 edition of the race when the two teams worked together on a similar move, resulting in a Cavendish stage victory.

On that occasion, the eventual winner of the race Britain's Chris Froome had narrowly missed the split and lost time to his rivals, but was more alert to the danger this time around and joined Contador in the front group, consisting of 24-riders.

Last year's winner Vincenzo Nibali of Italy and Colombia's Nairo Quintana were among the key men to miss the split in the race and were forced utilise their teams in the second group in a desperate bid to minimalise losses.

As the leading group opened up a 50 second advantage over the chasing pack further disaster appeared to strike Nibali as a puncture threatened to see him fall even further adrift.

With the support of his teammates, however, he soon found himself back in the group.

With the leading group hurtling towards the finish Etixx-Quick Step appeared to be primed to set Cavendish up for the victory as they boasted five riders in the group, in addition to the Manx sprinter, including world road race champion Michal Kwiatkowski of Poland and Germany's Tony Martin.

Cavendish, though, launched his sprint to the line too early Germany's Greipel and Slovakian national champion Peter Sagan to edge ahead in the closing metres, with Griepel crossing the line first in 3 hours 29min 03sec to take the stage victory.

Cavendish was also passed by Trek Factory Racing's Cancellara, in a result that saw the Swiss rider take third on the stage, gaining a four-second time bonus.

The bonus proved crucial in allowing him to claim the race leader's yellow jersey for the 29th time in his career, as Martin's one second advantage from the stage one time trial had put him on course to become the new leader by finishing in the winning move.

Froome was able to gain four seconds on Contador in the sprint for the line after he was given the same time as the stage winner Griepel.

The two rivals earned earned significant time gaps over Nibali and Quintana, who both finished 1:28 down on the lead group.

The general classification hopefuls could be at the fore of tomorrow's action as the third stage is due to see the race enter Belgium, with the 159.6km stage beginning Antwerp and ending with the first summit finish in Mur de Huy.