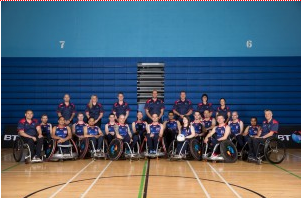 “This is an important tournament for us as it is a qualifier for Rio 2016," said Great Britain Wheelchair Rugby performance director Lorraine Brown.

"Since London 2012 we’ve been honing our squad and introducing a number of younger players to the game who are playing alongside experienced players such as Mike Kerr, Alan Ash and Jonathan Coggan.

"We still have work to do but we are building a strong squad and tournaments such as the European Championships will only help strengthen the team further.”

Britain will play against France, Belgium and two-time defending champions Sweden in their opening matches in event, set to take place from September 13 to 20.

Denmark, Finland, Germany and Ireland will meet in the other group.

Currently ranked fifth in the world but highest in Europe, Britain will be seeking a first triumph since the final of three successive victories in 2007, when the biennial event was also held in Finland, in Espoo.

“It is an exciting time for the game, our squad is maturing each day and, thanks to the funding support of UK Sport, the Lottery and Sport England, we’ve been able to focus on their development needs, as well as to open more clubs across the UK," added GBWR chief executive David Pond.

"In the last year alone we’ve seen three new clubs open and have plans for more over the next 12 months.

"We are also delighted with our new partnership with BT which is already enabling us to further develop the sport.”