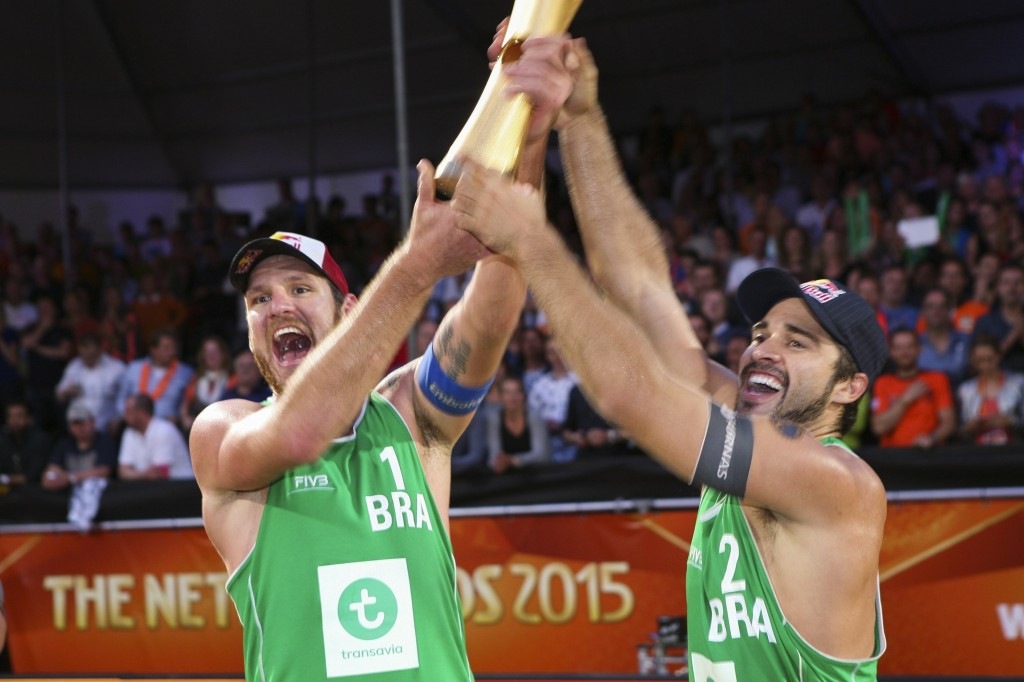 Pre-match a packed crowd had tried to lift the home favourites with a rousing rendition of the Dutch national anthem, with Nummerdor and Varenhorst bidding to become the second successive pairing from The Netherlands to claim the trophy following the success of Alexander Brouwer and Robert Meeuwsen's two years ago in Poland.

It appeared to have a positive effect on the duo as they fed of the crowd's energy to take a 10-4 advantage and appeared on course to comfortably win the first set in front of King Willem-Alexander and Queen Máxima of The Netherlands, who were lending support to the finalists.

Varenhorst, in particular, was enjoying a stunning opening set, with several crucial blocks helping to add to their advantage, before sealing a one sided first set 21-12.

Brazil did not have history from their side as since rally scoring had been introduced in 2001 no team to lose the first set of the World Championship final had fought back to win.

In 2011 world champion Alison, though, they had the experience to get back into the match and started the second set impressively, moving into a 12-9 lead.

Several quick-fire points for Brazil turned the match on its head as they pulled away from their opponents to claim the second set 21-14 and force a decider.

Instead of feeling the pressure of the occasion, both teams appeared to raise their level once more with several stunning rallies, but Nummerdor and Varenhorst appeared on the verge of victory on several occasions only to see six match points drift away due to some stunning defensive work from the Brazilian pairing.

Alison and Bruno secured their second match point of the dramatic finale to the World Championships and took their opportunity to momentarily silence the home crowd and win the gold medal 12-21, 21-14, 22-20.

"Everyone in Brazil knows I really love The Hague, my best results are here, and you guys did a great job today," said Bruno.

"We were losing all the time in the tie-break and we came back, so it was even better."

There was also success for Brazil in the bronze medal match as Evandro Goncalves and Pedro Solberg secured a straight sets victory over Theodore Brunner and Nick Lucena of the United States.

The first set was a closely-fought encounter the Brazilian pair were able to edge 22-20.

Evandro, however, delivered a stunning performance in the second to put the match out of the reach of the Americans.

With the crowd clapping in preparation for his serves the 25-year-old responded with several powerful aces to put them into a clear lead and quickly wrapped up a 22-20, 21-13 victory.