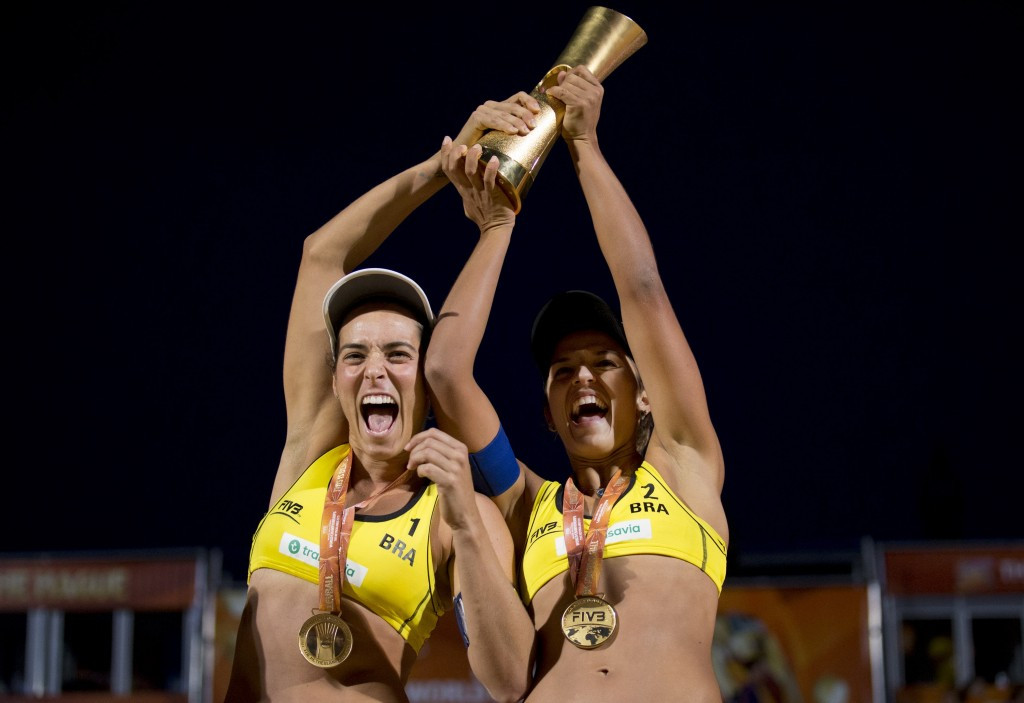 Barbara Sexias de Freitas and Agatha Bednarczuk won the Beach Volleyball World Championships for the first time after they were victorious in the all-Brazilian final here tonight.

They found themselves behind early on in the match as Fernanda Alves and Tatiana Lima showed why they had only lost one set in the whole tournament, taking a 9-6 lead, with Fernanda continuing where she had left off in the semi-final by dominating around the net.

Barbara and Agatha were able to turn the tide to level the scores at 15-all, though, and then they began to build a comfortable lead of their own.

It culminated in the duo having several set points which they made the most of on the third attempt to take the set 21-18.

With so much at stake the second set was a nervy affair, neither pair being able to establish an advantage until the closing points when Barbara and Agatha made their move to earn two match points with the score 20-18 in their favour.

Fernanda and Lima were not finished yet, however, and produced some of their best shots of the tournament in several thrilling rallies to tie the scores up once more at 20-all.

It did not prove enough as a poor serve by Lima gave their opponents another match point and this time Barbara and Agatha took their chance, a Barbara smashed effort sealing a 21-18, 22-20 win and the gold medal.

Brazil had completed the clean sweep of medals earlier in the day as Juliana Felisberta da Silva and Maria Antonelli fought back to beat Germany’s Katrin Holtwick and Ilka Semmler for the bronze.

The German pairing were much improved from their semi-final defeat yesterday, claiming the opening set 25-23, but with so little between the two teams it was no surprise that a deciding set was needed as Juliana and Antonelli took the second 21-18.

The Brazilians continued that momentum into the decider, eventually earning a thrilling victory and also beating their German opposition for the first time at an FIVB event.

There had been delight for the home crowd in the morning as The Netherlands' Reindeer Nummerdor and Christian Varenhorst booked their place in the men's final by beating Brazil's Pedro Solberg and Evandro Gonclaves.

The Dutch duo used the support of the packed crowd to good effect, by racing into a 3-0 advantage and forcing their opponents to take an early time out to discuss how to cope with the fast start made by Nummerdor and Varenhorst.

Although Solberg and Goncalves were able to fight-back into the set they were always playing catch-up and, despite being able to move a point behind at 17-16, Nummerdor and Varenhorst stepped up their level again and took the opening set 21-18.

The match looked likely to be heading for a straight sets victory for the Dutch pair as they continued their impressive form to earn two match points, however they were left stunned by a Solberg and Gonclaves revival as the Brazilians produced a series of remarkable defensive shots to move to set point, which took on the first time of asking.

The drama continued as both pairings were unable to preserve leads in the deciding set, but once again Nummerdor and Varenhorst moved to match point and this time successfully converted it to win 21-18, 21-23, 15-12.

Nummerdor and Varenhorst are set to face more Brazilian competition in the final, as they attempt to succeed their fellow countrymen Alexander Brouwer and Robert Meeuwsen as world champions, after Alison Cerutti and Bruno Schmidt triumphed easily in the second semi-final.

The duo rarely looked in trouble throughout the duration of thr match, securing the opening set 21-17 against the United States' Theodore Brunner and Nick Lucena.

With Cerutti, targeting a third appearance in a World Championships final, dominating points at the net a comfortable 21-17, 21-15 was wrapped up by the Brazilians and they can now turn their attentions to tomorrow's final.