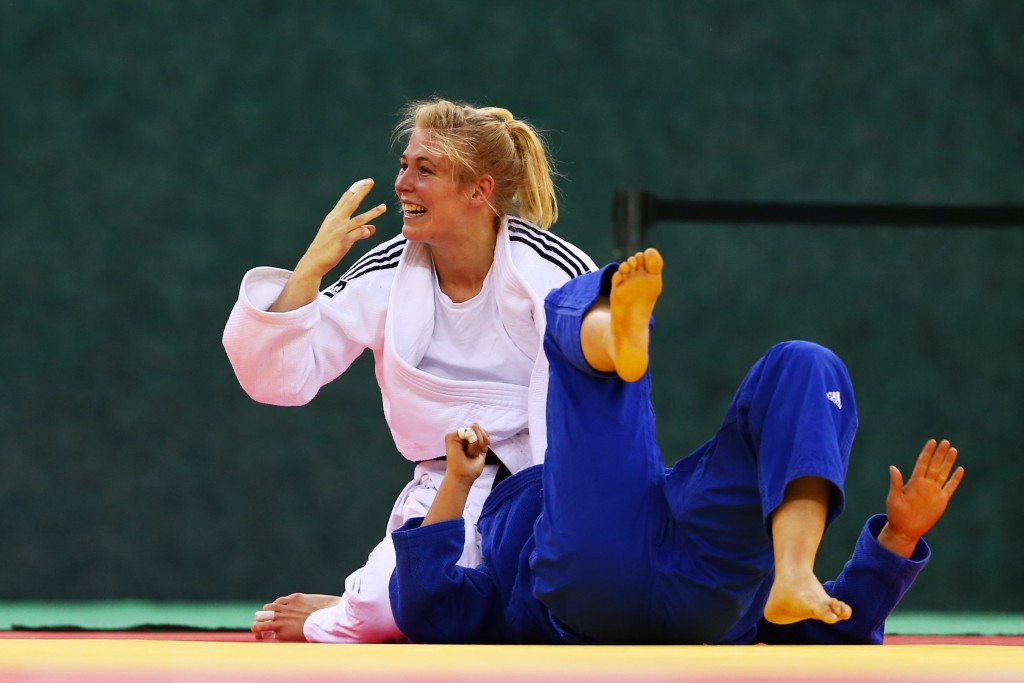 The Netherlands’ Kim Polling produced a series of superb performances at the European Judo Championships to be crowned women’s under 70 kilogram champion, with the event being staged here within Baku 2015.

Polling, the defending European champion in the division, highlighted her class on route to the final as she won her three bouts in an accumulative time of three minutes five seconds, ending each of contests with a match-winning ippon.

Her comfortable progression set up a repeat of the 2014 European Championship final against Laura Vargas Koch, with Polling triumphing on that occasion in Montpellier.

The German provided more resistance than Polling’s previous opponent but she too fell to defeat as the result of an ippon, forcing her to settle for silver again.

The podium was nearly exactly the same as in 2014 as Austria’s Bernadette Graf secured bronze again, with Germany’s Szaundra Diedrich the only addition.

While Polling’s performance throughout the day was clearly the most impressive, the highlight of the night was a gold medal for home favourite Ilham Zakiyev in the men’s over 90kg blind judo event as the Azerbaijani, roared on by the crowd, secured the match-winning ippon over Ukraine’s Oleksandr Pominov.

Zakiyev seemed overcome with emotion after being confirmed as the gold medallist, placing his head in his hands in shock.

The judoka then appeared to be in tears after being presented with his medal and being briefly joined on top of the podium by Azerbaijan’s President Ilham Aliyev.

It was one of two visually impaired events to take place on the second day of judo competition, but it was also the only one to go in the host’s favour as Ukraine’s Inna Cherniak claimed victory over Azeri judoka Sabina Abdullayeva through an ippon in the women’s under 57kg blind competition.

The night was also memorable for Georgia’s first gold medal of the European Games, with 2014 European champion in the men’s under 81kg division Avtandil Tchrikishvili prevailing in a closely fought affair with Russia’s Ivan Nifontov.

Both judoka’s traded waza-ari’s in the early stages of the bout to leave the scores level at 10-10 heading to the end of the contest, which allowed Tchrikishvili to triumph, having accrued one less penalty than his opponent.

Georgian fans, who were plentiful in their number in the Heydar Aliyev Arena, would have been dreaming of two golds medals heading into the medal bouts as Nugzari Tatalashvili had also progressed to the men’s under 73kg division final.

It  was not to be for Tatalashvili, though, as Israel’s Muki Sagi, who had earlier knocked out the defending champion Dex Elmont of The Netherlands, took the title with an ippon with just less than 30 seconds remaining of the final.

Slovenia’s Tina Trstenjak, the silver medallist last year in the women’s under 63kg division, was unable to better her effort in Baku, as she fell to defeat to Martyana Trajdos, as the German’s waza-ari proved enough for her to take the victory 10-0.

Having seen her title defence come to an end in the semi-finals France’s Clarisse Agbegnenou bounced back by earning one of two bronze medals, with the other being won by Israel’s Yarden Gerbi.