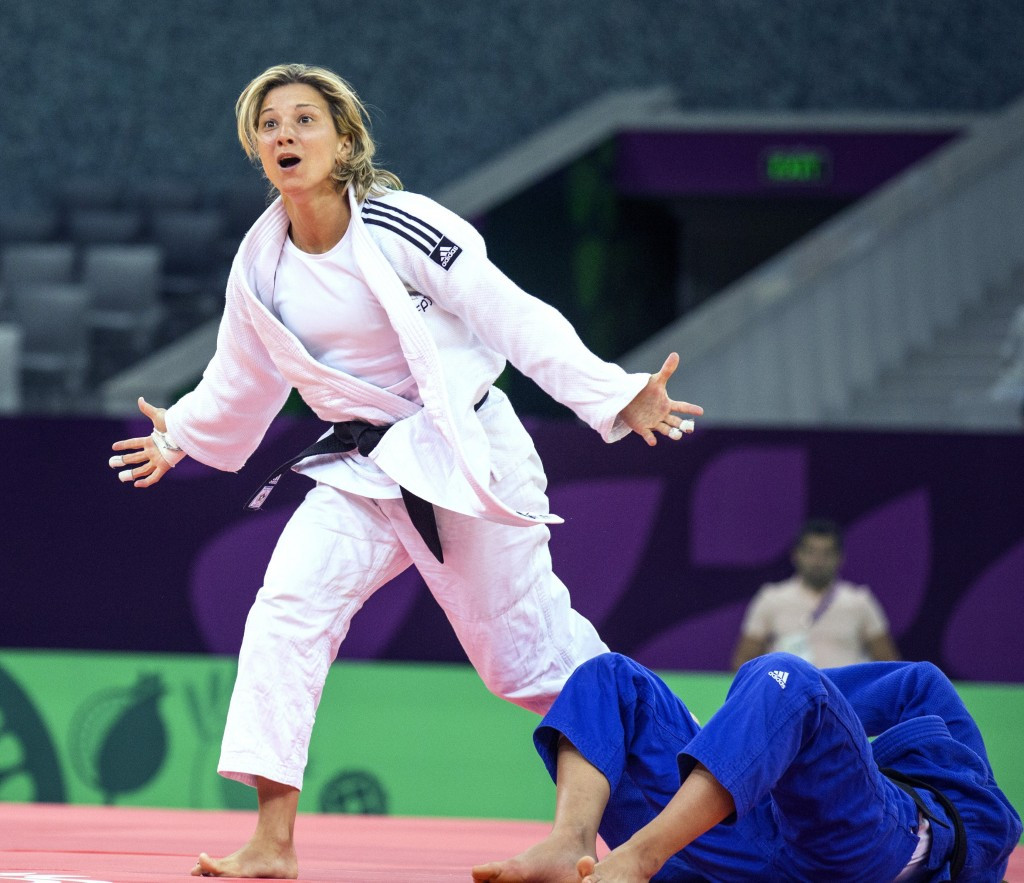 Russia’s domination of combat sports at the European Games was maintained on the first day of the European Judo Championships being staged here within Baku 2015, winning five out of five of their medal matches and taking both men’s golds in the under 60 kilogram and under 66kg classes.

But the high point of emotion came from a judoka who is a medal-winning phenomenon all on her own, Portugal’s 29-yer-old Telma Monteiro, as she wept on the podium after defeating Hungary’s Hedvig Karakas on ippon to win her 11th consecutive medal at the European Championships - and most importantly, her fifth gold.

The other women’s titles were claimed by Romania’s Andreea Chitu, who beat Annabelle Eurane of France in the under 52kg class, and Belgium’s London 2012 bronze medallist Charline van Snick, who had a two-year ban for cocaine use overturned by the Court of Arbitration for Sport year, and who defeated Ebru Sahin of Turkey in the under 48kg class.

Asked why the tears arrived given that she is such a serial winner, world number one Monteiro replied: "It's unbelievable because the first match was so tough and I felt so tired, and at the same time it gave me preparations mentally for the hard day.

"I understood that I could fight to this limit until I have nothing more to give.

"It was a really hard day and for me to win a gold medal in the European Championships and the first European Games is very special because I was thinking of all the work I’ve put into it.

"When you finish, everything seems so easy, but there’s so much work behind each victory.”

For all her experience and talent, Monteiro had lost to her opponent in the semi-final, France’s London 2012 bronze medallist and European champion Automne Pavia, three times before.

“I was trying something new this time and that worked,” she said, adding that her first match against Jovana Rogic of Serbia, which she had to win on a shido in the golden score, had been her hardest.

Her annexation of gold was swift and dramatic as she pinned Hungary's former European champion Karakas with her legs, then spun and leveraged her up, over and back down onto her back.

It was like seeing a nail being pulled out of a piece of wood by pliers.

Now Monteiro, who also has four World Championship silver medals, is homing in on Rio 2016, where she wants to win the first Olympic medal of her illustrious career.

"Until I’m done competing I will fight for that Olympic medal, because I think I deserve it and I’ve worked for it,” she said.

“It is special and with all the work I put in every day I must think I can do it."

The women’s under 57kg category also witnessed a historic achievement as Nora Gjakova, the European under-23 champion, won bronze to secure Kosovo’s first medal of these European Games or any other major multi-sport event having only been formally admitted to the International Olympic Committee last December.